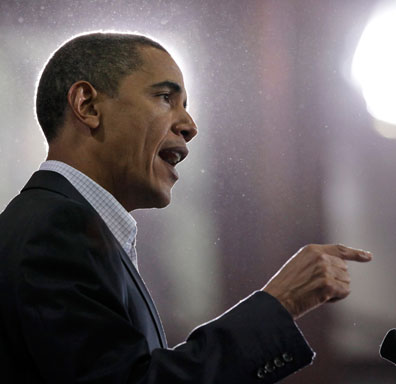 (AP Photo/Alex Brandon)
If President Obama's troubled by the falloff in his popularity since the inauguration, he can perhaps take solace from Ronald Reagan's experience. After riding a tide of popularity into the White House, President Reagan's poll numbers plummeted as the recession he inherited worsened. By late 1982, the nation's jobless claims soared to nearly 11 percent. But after the economy began to rebound the following year, The Gipper's poll numbers also brightened, paving the way for "Morning in America" and a second term.

That's the glass half-full view. Then there's Jimmy Carter, who came into office in 1979 enjoying a wave of post-Watergate support from the public but exited Washington with a 34 percent job approval rating.

Which way now? Little more than halfway into his first year on the job, it's clear that President Obama has reached one of those periodic crossroads we love to point out with 20-20 hindsight years later. The honeymoon is clearly over but if the economic stimulus measures take root and if the president's domestic policy measures pass and if Afghanistan and Iraq turn out well - well, that's already a lot of "ifs" - he may enjoy a bounce in public opinion. He could use one. A notoriously fickle public is already showing its restlessness. To wit:

* Less than half the public now approves of how President Obama is handling the war in Afghanistan, down from 56% in April, according to a new CBS poll.
* 60% of Americans say the president has failed to clearly explain his plans for health care reform, according to a separate CBS poll.

Such is life in the presidential fishbowl. After all the post-inauguration hype, a letdown was guaranteed at some point as no president holds on to a 70% approval rating for long. In fact, pollsters Doug Schoen and Scott Rasmussen predicted something like this as far back in March, when the president was still thought capable of walking on water.

Despite grumbling from the left wing of his party, the president can count on strong Democratic support to compensate for nearly-united Republican opposition in Congress against his policies. The worry is how to keep independents. A CNN/Opinion Research poll shows that 53 percent of independents are dissatisfied with the president's overall performance, a decline that's contributed to his weaker public support.

In fact, writes New York Times columnist, David Brooks, "in the history of polling, no newly elected American president has fallen this far this fast. Anxiety is now pervasive. Trust in government rose when Obama took office. It has fallen back to historic lows. Fifty-nine percent of Americans now think the country is headed in the wrong direction."

Brooks, a moderate conservative, argues for a go-slow approach and says that the administration's best bet for rescuing his first term is to retreat from its grander ambitions. Like most Monday morning quarterbacks - especially those offering critiques from the right - Brooks has a hard time believing that big sweeping change is ever going to turn out well. Michael Goldfarb of the Weekly Standard is in the same camp. He offers a gloomy prediction of the administration's chances for moving its agenda through Congress, adding that President Obama has started to "lose the middle" by overreaching.

"...Putting Joe Biden in charge of selling (the stimulus) as a success is proof enough that they didn't understand how important it was for the stimulus to be perceived as something other than a total failure, if not an outright success. But then came cap and trade, and Nancy Pelosi and the Obama administration stood behind the Blue Dogs telling them to advance in the face of withering fire -- and threatening to shoot them in the back if they didn't. Advance they did, but the Senate never picked up the legislation, and it has no serious plans to. The Blue Dogs took a huge risk for nothing."

If the United States is as truly risk-averse as they suggest, then the status quo will prevail. Those arguing that this is the moment for widespread structural change will then have to accept half a loaf and get on with their lives. But what's to guarantee that adopting a Blue Dog agenda will help revive President Obama's popularity either with moderates or Republicans?

In dismissing the Rahm Emanual adage not to waste a crisis by thinking small, the irony is that conservatives are ignoring a triumphant chapter in their own movement's history. It's the same political gospel - albeit under a different byline - that their activists used to help usher in the Reagan Revolution.