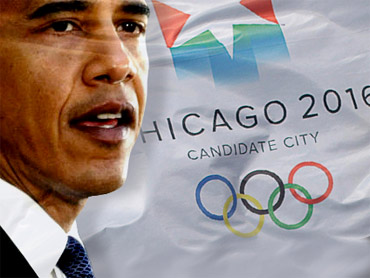 President Obama's decision to travel to Copenhagen to boost Chicago's chances of winning the 2016 Olympics has drawn criticism from some Republicans, who call it a boondoggle for Obama's hometown allies and evidence the president has blurred his priorities.

Republican National Committee Chairman Michael Steele denounced the visit on a conference call with reporters Tuesday. Calling it "noble for the president to pitch his home city, Chi-town," before the International Olympic Committee on Friday, Steele said it nonetheless was a distraction from more pressing issues such as health care, job creation and other urgent demands on Obama's time.

However, Mitt Romney, the former Massachusetts governor and 2008 Republican presidential contender, said Obama was right to make an appearance.

"In the current environment, the presence of a head of state is important to get the Games," Romney, who headed the 2002 Olympics in Salt Lake City, Utah, said, noting that former British Prime Minister Tony Blair had set a new standard by personally lobbying for his country's succesful 2012 Olympic bid.

"Who's he rooting for?" Robert Gibbs said. "Is he hoping to hop a plane to Brazil and catch the Olympics in Rio? I don't know. Maybe it's Madrid."

Steele's comments echoed those of Rep. Peter Hoekstra of Michigan, the ranking Republican member of the House Intelligence Committee, who told reporters Obama should focus on the escalating conflict in Afghanistan.

Just last week Obama said he wouldn't make the trip to Copenhagen, citing his need to press for health care reform legislation instead. White House officials mentioned the economic benefits the U.S. would receive from a winning Olympics bid in explaining the president's sudden change of heart.

First Lady Michelle Obama was originally slated to represent Chicago before the IOC but will now share the duties with her husband.

The city's bid is competing with bids from Rio de Janeiro, Madrid, Spain and Tokyo, and the heads of state from Brazil, Spain and Japan are appearing in person to make their countries' pitch.

Indeed, Curt Hamakawa, director of the Center for International Sport Business at Western New England College in Massachusetts, said Chicago would likely lose the bid if Obama had chosen not to go.

"For the president not to attend would send a signal, and it would not be helpful to Chicago's bid. Almost certainly it would result in Chicago not having a chance," Hamakawa said, adding that if Obama had stayed home and Chicago wasn't selected, "Republicans would have been crabbing that he didn't do enough."

Republican strategist John Feehery said it was important for Republicans to pick their battles in deciding how and when to criticize Obama.

But Feehery, a Chicago native who said he is rooting for the city to win the Games, said his party's complaints about Obama's trip were well-founded.

"He's taking a bunch of Chicago cronies on an all expense paid trip to Copenhagen for just one reason, to get the Olympics," Feehery said. "For me it makes him seem unserious and look slightly desperate."

Grumbling about Obama's trip began to bubble up on conservative blogs and Web sites soon after the White House announced Obama's trip Monday.

"It's not like the president doesn't have anything to do, nothing important on his plate at the moment, right?" the blog Rightwing Nuthouse.com asked, while the conservative Drudge Report posted a television news story about a Chicago teen beaten and murdered in gang warfare there last week.

"Olympic Spirit," the Drudge Report declared in a headline.