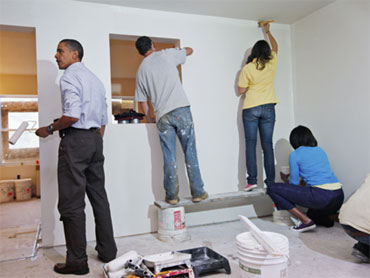 (AP)
In a few months time, some family is going to be able to boast that the living room of their refurbished home was painted by the President and Mrs. Obama.

Wielding paint rollers and brushes, the Obamas laid down an even coat of "Cool Platinum" wall paint.

"you know, I don't think anyone will have to re-do it, I hope," said Mr. Obama as he finished one section of the back wall and stepped back to assess his work.

The First Couple was commemorating the 8th anniversary of the 9/11 attacks, which this year is designated a National Day of Service and Remembrance.

"I call upon all Americans to join in service and honor the lives we lost," Mr. Obama said in a presidential proclamation.

The Obamas began their day observing a moment of silence at the White House for the victims of the 9/11 attacks. Then, despite a heavy downpour, they paid their respects at the 9/11 Memorial at the Pentagon where 184 lives were lost when the hijacked American Airlines flight 77 was deliberately flown into the Pentagon. 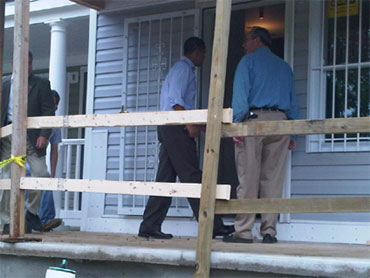 (CBS/Mark Knoller)
"Let us renew our resolve against those who perpetrated this barbaric act and who plot against us still," said the president, speaking in the pouring rain that left him drenched to the bone.

He placed a wreath at the Zero Age Line on the memorial plaza that marks the date and time of the Pentagon attack.

Having fulfilled the remembrance portion of the proclamation, the Obamas returned to the White House, got into some dry clothes, and then headed to a Habitat for Humanity housing project in Northeast Washington, D.C.

They toured two side-by-side row houses and then rolled up their sleeves to begin painting the interior. Mr. Obama used a roller while the First Lady performed more delicate work in a corner of the room with a brush. They spent about half an hour at it.

The effort is more symbolic than effectual. A presidential visit to a worksite like this always slows things down. But think of the pride the new homeowners will have about the paint job in their living room. That is, if anyone tells 'em who did it.