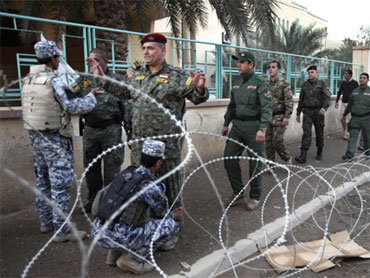 (AP Photo/Karim Kadim)
This story was filed by CBS News foreign affairs analyst Pamela Falk, reporting from the United Nations.Iraqis go to the polls on Sunday to elect the members of parliament who will, if all goes according to plan, help complete the transition of power and security from the U.S. military back into Iraqi hands.

The stakes are as high as they've ever been -- and not just for Iraqis and their politicians. How smoothly the voting goes, and its results, will have direct implications for the Obama administration's goals of drawing down U.S. combat troops by September, and getting all troops out of the country by the end of this year.

Mr. Obama isn't the first American president with hopes of reducing the U.S. military presence in Iraq by trying to support and foster a stable, democratically elected government -- a government able to protect its own and deliver basic services. But U.S. foreign policy is littered with failed attempts.

Iraq's population remains largely divided along sectarian lines, with Shiite, Sunni and Kurdish populations resoundingly backing politicians of the same ethnicity. As the U.S. and the United Nations aim to keep their role in the vote low-key, there is uncertainty about how far the elections can go toward ending those divisions and accomplishing the goals stated above.

More than 6,000 candidates are contesting 325 seats in Iraq's Parliament, and the makeup of that body is essential as Parliament chooses the Iraqi Prime Minister.

Deadly suicide bombings have increased in the lead-up to the elections and militias continue to intimidate voters. The same militants may try to promote civil strife in the aftermath of the voting.

The U.N.'s role in the vote is dictated by a Security Council Resolution which requires the world body to advise the Iraqi Independent High Electoral Commission (IHEC) and to work with Iraq's political leaders to prepare for elections, but the U.N. will not be monitoring the elections.

"Monitoring is done by other parties; since the U.N. provided technical support for the elections, we couldn't credibly monitor them (which would, in effect, amount to monitoring ourselves)," Farhan Haq, a spokesman for the Secretary General tells CBS News.

Some of the biggest controversies took place before campaigning even began, with the selection -- and disqualification -- of candidates. Many were removed from the ballot because of links to Saddam Hussein's Baath Party. In response to criticism, Iraqi Prime Minister Nouri al-Maliki planned to bring 20,000 Hussein-era military officers into the Iraqi Armed Forces.

The U.N. Secretary-General's Special Representative for Iraq, Ad Melkert, briefed the Security Council last month on the controversial "de-Baathification" process, saying the U.N. Mission in Iraq has consistently emphasized the due-process requirements and refrained from judging the outcomes.

"What will matter most is the acceptance by the Iraqi people of the election result," Melkert said. The Security Council is playing a role by laying the groundwork to lift sanctions imposed under Saddam's rule.

The greatest fear, both in Iraq and for the Obama Administration, is that elections could divide, rather than unite the country. There is little question, however, that the country is engaged in the campaign.

In a nation where providing even the most basic services has been a huge challenge since the war, it is remarkable the level to which candidates in this election have taken their campaigns abruptly into the 21st century. Many are taking full advantage of social networking sites, with individual candidates and political coalitions offering information on their platforms to anyone with access.

Violence is the greatest threat to the election; the Associated Press calculates a 44 percent increase in Iraqis killed in military conflict between January and February, made up largely of civilians.

The Obama Administration is banking on an election with enough U.N. support, reasonable transparency and political unity to keep the 20 percent minority Sunni population, the tribal groups, and the Kurds in government alongside the Shiite majority. If that happens, and Iraq's relative, fragile stability remains in tact and growing, then Mr. Obama's aspirations for withdrawal will also live to see another day.