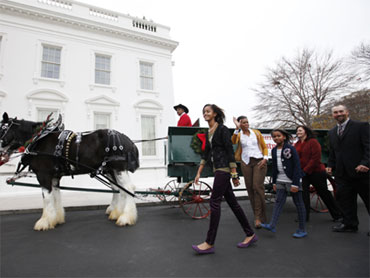 It's apparently not a hard choice for Malia and Sasha Obama. President Barack Obama says his 12- and 9-year-old daughters would pick the talking yellow sponge over a talking head any day.

"They are not watching cable TV," he told ABC News in an interview that aired Friday night. "If they have got an option of watching the news or watching SpongeBob, I think it's pretty clear the choice that they are going to make."

The girls can't completely avoid all talk about their father, however. For Malia, he's come up in discussions of current events at school.

"There are issues of the day that come across the conversation. But I have to say that the school is very good about handling it," Michelle Obama said in the joint interview with her husband. "People are very considerate."

She said Malia has managed to draw a line between her father's activities and her own.

In the interview, the Obamas offered a glimpse into their personal life in the most famous house in America.

Mrs. Obama revealed that she went to bed on Election Night before waiting for all the returns to come in; Republicans wound up seizing control of the House of Representatives from Democrats. She said she had to get up early and figured she would get the election results in the morning.

Their daughters prefer just to be kids, the Obamas said, and avoid listening to the news or reading newspaper headlines. Sasha still writes letters to Santa Claus and anxiously waits for the Tooth Fairy after she loses a tooth, Mrs. Obama said.

The family prays every night before dinner and Obama said it's interesting to hear what his daughters pray for.

"They'll talk about family and thanking God for blessing us, but they'll always add a little twist: 'I hope we have a great Thanksgiving, I can't wait to see the cousins.' They used to pray for a dog, until we got a dog," Obama said.

"But in the end we always say, 'We hope we live long and strong,"' Michelle Obama added.

"Long and strong," the president echoed.

Asked how he relieves the stress that comes with the job, Obama said two things help the most: exercise and spending time with his kids.

"When you're stressed, they are just ... they're funny, they're smart, they're happy," he said.

"They rock you back into what's important," added the first lady.

Obama said one of the most important things for him in terms of stress reduction "is the fact that if I'm here in Washington, I'm having dinner at 6:30, just about every night and sitting around that table, listening to them, and trying to answer their questions. That keeps my bearings."

Obama said he likes to watch football in the White House Treaty Room, and that he and the first lady watch sports news while they work out in the morning.

"Hopefully you will be as happily married as Barack and I," she said, sending good wishes to the couple.