This story was filed by CBS News foreign affairs analyst Pamela Falk from the United Nations.

President Barack Obama makes his debut at the United Nations this week, giving his first address to the U.N. General Assembly and, presiding over a Security Council meeting – the first time a U.S. president will have done so. 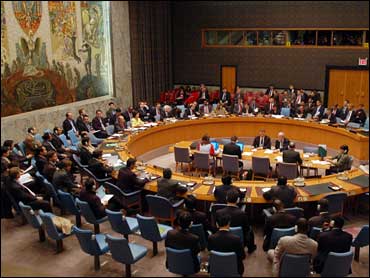 He is expected to be received with open arms by a diplomatic corps, which sees him as an agent of change in U.S. policy from confrontation to negotiation. It sounds like he may even receive a standing ovation from the 120 heads of state and government.

President Obama is likely to emphasize the pressing need for global disarmament and nonproliferation and the interest of the U.S. in strengthening the role of U.N. peacekeepers – or blue helmets – rather than being the world's policemen.

But he certainly won't be doing all that and more in his 15-minute speech to world leaders. Rather, he has a dizzying set of meetings set up, all with varying agendas. Just a week ago, the White House announced that the president would address the U.N. Climate Change Summit, meet with Sub-Saharan African leaders, hold a U.S. meeting for U.N. peacekeepers, and have bilateral meetings with the leaders of Japan, China and Russia.

Then, to add another "first" to the list, President Obama will be the first U.S. president to chair a U.N. Security Council special session (because the U.S. happens to hold the rotating Presidency for the month of September) with heads of state (including Colonel Moammar Gaddafi, since Libya is on the Security Council now) on nonproliferation and disarmament and will introduce a resolution (which presumably has been negotiated to pass) calling on all countries with nuclear arms to abandon their weapons.

That is not to mention the social gatherings – dinner with the climate change leaders, the Secretary General's lunch and the U.S. diplomatic party – all while trying to avoid the traditional U.S. adversaries, such as Iran's Mahmoud Ahmadinejad, Libya's Col. Moammar Gaddafi, and Venezuela's Hugo Chavez, in any social setting. (He does not have to worry about North Korea's Kim Jong Il or Cuba's Raul Castro since they are not attending this year.) This, after a handful of Sunday talk show interviews and the Late Show with David Letterman.
The question: Is an agenda this packed with world conflicts too much?

The president is ambitious to take on the U.N., no doubt. But his agenda is sort of like the kid at Disneyland who wants to go on every ride.

America's foreign policy hot-button issues are the war in Afghanistan and the fact that the commander of U.S. and NATO forces in Afghanistan, U.S. Army General Stanley McChrystal apparently has his doubts about the corruption of the Afghan government and wants more troops to avoid a U.S. loss – words that rang out in the leaked memo this week; and a close second on U.S. priorities is the nuclear brinksmanship of Iran's holocaust-denying president.

Thus, the doubt that the administration should be feeling this week is whether or not the administration has taken on too many issues, and will appear weak on the big ticket items. The Obama administration made many diplomats at the U.N. and the International Atomic Energy Agency breathe a sign of relief that the U.S. would hold the much-sought-after direct talks with Iran. But, the world watched as Iran's Ahmadinejad said clearly that his nuclear program was not on the agenda.

President Obama may have been looking for Russian support for his announcement of the change in policy on the missile shield issue. But without an announcement that included Poland, the Czech Republic and Israel as his side, the change of policy raised the debate as to whether or not the policy reversal was coming from weakness rather than strength.

Both Ahmadinejad and Gaddafi managed to get speaking roles on the day that President Obama speaks to the General Assembly and their rhetoric will likely be a contrast to his, although the world organization will also hear from the leaders of Russia, China, France and Britain, who are supportive of the President's disarmament goals.

President Reagan, in his 1982 address to a special U.N. session on disarmament, stuck to one theme as he took on the Soviet Union, saying, "Agreements on arms control and disarmament can be useful in reinforcing peace; but they're not magic. We should not confuse the signing of agreements with the solving of problems. Simply collecting agreements will not bring peace. Agreements genuinely reinforce peace only when they are kept. Otherwise we're building a paper castle that will be blown away by the winds of war."

But, like Reagan, President Obama is strengthening the U.N., which he appears to see as an organization that may not be able to achieve peace worldwide, but one that can avoid war.

The Obama Administration has been negotiating intensely, in the days leading up to his U.N. meetings, with both allies and adversaries, to showcase the commitment to nuclear disarmament and nonproliferation and has made that the focus issue for the Security Council meeting.

But Americans are as concerned with the recent threat of domestic terrorism and with a war that might involve more American troops. A focused message and some meetings with Afghan's President Hamid Karzai might make his message clearer.

We will all watch, and wait to hear the messages – and just hope that he gets his index cards straight in the around-the-clock meetings.