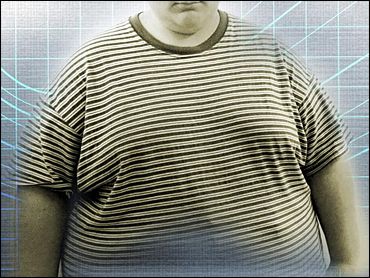 By ages 12 to 14, half of obese children have metabolic syndrome, a group of risk factors that predicts heart disease and type 2 diabetes.

The finding, by University of Miami researcher Sarah E. Messiah, PhD, MPH, and colleagues, isn't trivial. More than 17% of children aged 8 to 14 were obese in 1999-2002, when the data were collected.

Even at ages 8 to 11, as many as 9.5% of obese children already have metabolic syndrome. That means they have at least three of these risk factors: abnormally large waist size, high blood-sugar levels, low levels of HDL "good" cholesterol, high blood fat levels, and high blood pressure .

"If a kid is age 8 with metabolic syndrome, it will take 10 years or less for that child to become a type 2 diabetic or develop heart disease," Messiah tells WebMD. "So as these kids enter adulthood, they could be faced with an entire life of chronic disease."

Obese kids aren't dropping dead in their teens, but by then, many have serious heart problems, says John K. Stevens Jr., MD, a cardiologist at Children's Healthcare of Atlanta's Sibley Heart Center.

"I am very fearful that in the next 10 to 20 years we will have an explosion of type 2 diabetes and coronary artery disease as these very young, very obese kids become 20-year-olds and 30-year-olds," Stevens tells WebMD.

The problem isn't a heart disease epidemic. It's a child obesity epidemic, Stevens says - and Messiah's numbers lead to the same conclusion.

The analysis comes from combined data on some 1,700 children ages 8 to 14 collected from 1999 to 2002 as part of the National Health and Nutrition Examination Survey (NHANES). The main findings:

This does not mean that overweight kids who don't yet have metabolic syndrome are out of the woods.

"Children who are obese and who don't have these risk factors should not be feeling good about it, because they will have them down the road," Stevens warns. "When we hear of people dying of coronary artery disease in their 30s and 40s, we are shocked and amazed and say, 'That is too young.' But I am fearful we are going to be seeing coronary artery disease a lot earlier in these kids growing up obese."

There is, however, a window of opportunity for obese and overweight kids - even those who already show signs of heart disease.

"There is a chance - if people get serious about this and eat less saturated fats and exercise more and lose weight, they can reverse some of this process," Steven says.

To that end, Messiah's team is working on a plan to get overweight kids interested in strenuous exercise. If they can show it works in their clinic, she says, they'll move the program into the community.

"It is sad because these children are so young and I don't know if they have ever really known what feeling good feels like," Messiah says. "Think of the exhilarating feeling of a hard workout - these children have never experienced that. It is hard to get people to understand that exercise makes you feel good about yourself. So much of this has to do with kids being sedentary. If we could get kids moving and feeling good about being active, things would change."

Messiah and colleagues report their findings in an early online issue of the Journal of Pediatrics.