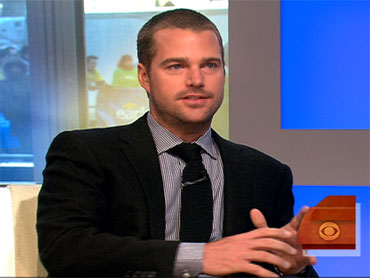 Chris O'Donnell has been working in entertainment for over 20 years. His most recent role, agent G. Callen in CBS' "NCIS: Los Angeles," has him playing a guarded, quick witted lone wolf partnered with LL Cool J's agent, Sam Hanna.

"NCIS: Los Angeles," a spin-off of "NCIS" with Mark Harmon, centers on a gang of NCIS agents (Naval Criminal Investigative Service) who solve murders in the military system.

The show has been a success and has already been signed for a second season. O'Donnell sat down with Early Show co-anchor Harry Smith to discuss his role as a fictional agent and a real-life family man.

O'Donnell, 39, has had a successful career both on the big screen and small screen. He starred in "Scent of a Woman" alongside Academy Award-winning actor Al Pacino, as well as "Batman Forever," among many others.

He said that although a script may look easy on paper, "it's all about the chemistry, and things coming together and actually the execution of it."

The original "NCIS" fan base helped with the show's successful ratings.

"We are really fortunate to have the original show as our lead in; they have the most loyal fans in the world. Even when 'American Idol' comes on, it doesn't affect it," he explained.

"We come from very different worlds and have different personalities. I think that as far as a working relationship, we have both been around the block and really want this to work. I think that we get a kick out of each other. Nothing's off limits, we just poke fun," he said.

"They're exactly the same!" O'Donnell replied with a laugh.

Despite his solid acting background, O'Donnell admitted that it still was "nerve-wracking" to wait for the ratings and see if the show would be picked up for a second season. He and the cast were relieved to find out the results.

O'Donnell is very different than his mysterious "NCIS: Los Angeles" character. In real life, he's a father of five - three boys and two girls, all under 15 years old. He has been married to a teacher named Caroline Fentress since 1997.

Since he's now based in L.A., O'Donnell gets to spend more time with his family. His son had the opportunity to play the role of his character's son in an "NCIS: Los Angeles" episode, which was a thrill for the entire family.