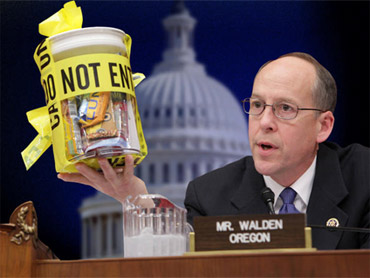 The "Office of GOP Transition" is officially open for business.

The Capitol Hill press corps was invited to the small office in the basement of the Capitol today to meet with Rep. Greg Walden (R-OR) to discuss how things will change over the next two months as Republicans prepare to take back control of the House of Representatives.

The expected Speaker - Rep. John Boehner - picked Walden to lead the GOP effort over the next two months to overhaul House rules, operations and procedures.

With leadership's input, Walden picked a group of twenty-two GOP lawmakers that he says represent a cross-section of the new Republican majority to serve on the transition team. Including, he says, newly elected members.

The transition team, Walden said, will tackle internal conference rules. This is where decisions over whether to permanently extend an earmark moratorium will take place. It is expected that the GOP conference will pass these rules at an organization meeting before Thanksgiving.

Walden said the transition team will also look at official House rules and make changes like requiring bills to be posted online for 72-hours before they can come to the floor for a vote. The House rules package would be adopted when the House first convenes in early January.

Finally, he said the transition team will look at how the House itself is run. "There has to be a better way to operate this place" Walden said. He proposed that the House schedule should be set so that members don't have to buy airplane tickets at the last minute which wastes money and time.

Walden said he will also meet with operation people who keep the Capitol running on a day to day basis to ask them what they would do to operate more efficiently and to cut costs and reduce wasteful spending.

Walden said he plans reach out to Rep. Mike Capuano (D-MA), the Democrat who led the transition for his party in 2006, for his input. Overhauling the House ethics process was a major focus for the Democrats that year, having toppled many ethics-plagued Republicans.

Capuano created the out Office of Congressional Ethics so that members were not necessarily policing themselves. When asked if ethical issues and that office specifically would be a focus for GOP transition team, Walden said he does not "see that as a major issue for us."

The GOP's focus, he said, will be changing the rules in such a way that will promote their promise to increase jobs and cut spending.

The transition team is expected to be announced on Monday. They plan to have their first meeting that night.