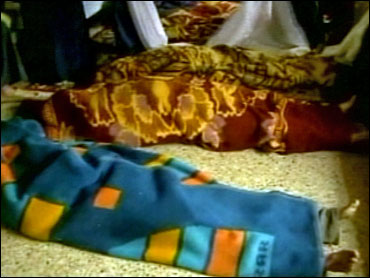 A major general and two senior officers have been disciplined for their roles in investigating the deaths of 24 Iraqi civilians in the town of Haditha in 2005, the Marine Corps said Wednesday.

Maj. Gen. Richard A. Huck, former commanding general of the 2nd Marine Division, has received a letter of censure from the secretary of the Navy for the "actions he took and failed to take" in response to the killings.

The statement from the Marine Corps does not elaborate.

Davis was cited for failure to take action when informed about the slayings. Sokoloski was cited for unsatisfactory performance of his duties.

"Accountability and responsibility are the foundation of all we do as Marines," said Gen. James T. Conway, commandant of the Marine Corps.

"While these three officers have served their country and corps exceedingly well for decades, their actions, inactions and decisions in the aftermath of the Haditha incident did not meet the high standards we expect of Marine senior officer leadership." Conway said.

In all, 24 civilians were killed by a Marine squad in the aftermath of a bomb blast that killed one Marine on Nov. 19, 2005. Among the dead were women and children who were killed in their homes as Marines went on a house-to-house sweep.

The disciplinary action came as a preliminary hearing continued in the Haditha case for Staff. Sgt. Frank Wuterich, 27, of Meriden, Conn., who is accused of unpremeditated murders in the slayings of 17 of the Iraqis.

Wuterich has acknowledged shooting five men who were at the scene of the bomb blast but claims he did so because they were running away from the site of the explosion. Combat rules at the time allowed Marines to shoot at people fleeing the scene of an attack.

Capt. Alfonso Capers, whom Wuterich reported to for about two years before the killings, struggled for an answer in military court when Lt. Col. Paul Ware, the investigating officer overseeing the Haditha case, asked how Marines are trained to confront mixed crowds of enemies and civilians.

"Is there a schoolbook answer?" Ware asked.

Capers, a government witness, acknowledged some limits on tactics in such situations. He told a prosecutor, Marine Maj. Daren Erickson, that troops did not have license to kill indiscriminately because it's "a bad stain" on the Marines.

Ware said the preliminary hearing was set to conclude Thursday. He will eventually make a recommendation on whether Wuterich should be court-martialed. Lt. Gen. James Mattis, the general overseeing the case, makes the final decision.