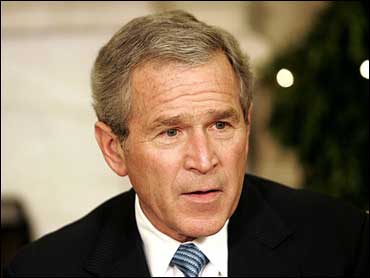 The disclosure follows angry demands by lawmakers earlier in the day for a congressional inquiry into whether the monitoring by the highly secretive National Security Agency violated civil liberties.

"There is no doubt that this is inappropriate," declared Republican Sen. Arlen Specter of Pennsylvania, chairman of the Senate Judiciary Committee. He promised hearings early next year.

In a broad defense of the program put forward hours later, a senior intelligence official said the eavesdropping was narrowly designed to go after possible terrorist threats in the United States. The official said that, since October 2001, authorization for the program has been renewed more than three dozen times. On each occasion, the lawfulness of the program is certified by the president's legal counsel and the attorney general. It is then personally signed by Mr. Bush.

Mr. Bush said in an interview that "we do not discuss ongoing intelligence operations to protect the country. And the reason why is that there's an enemy that lurks, that would like to know exactly what we're trying to do to stop them.

The president spoke in an interview to be aired Friday evening on "The Newshour with Jim Lehrer."

Neither Secretary of State Condoleezza Rice nor White House press secretary Scott McClellan would confirm or deny the report which said the super-secret NSA had spied on as many as 500 people at any given time since 2002 in this country.

That year, following the Sept. 11 attacks, Mr. Bush authorized the NSA to monitor the international phone calls and international e-mails of hundreds — perhaps thousands — of people inside the United States, the Times reported.

McClellan said the White House has received no requests for information from lawmakers because of the report. "Congress does have an important oversight role," he said.

Before the program began, the NSA typically limited its domestic surveillance to foreign embassies and missions and obtained court orders for such investigations. Overseas, 5,000 to 7,000 people suspected of terrorist ties are monitored at one time.

"This is Big Brother run amok," declared Sen. Edward Kennedy, D-Mass. Sen. Russell Feingold, D-Wis., called it a "shocking revelation" that "ought to send a chill down the spine of every senator and every American."

Administration officials reacted to the report by asserting that the president has respected the Constitution while striving to protect the American people.

Rice said Mr. Bush has "acted lawfully in every step that he has taken."

The report surfaced as the administration and its GOP allies on Capitol Hill were fighting to save provisions of the expiring USA Patriot Act that they believe are key tools in the fight against terrorism. An attempt to rescue the approach favored by the White House and Republicans failed on a procedural vote Friday morning.

The Times said reporters interviewed nearly a dozen current and former administration officials about the program and granted them anonymity because of the classified nature of the program.

Attorney General Alberto Gonzales refused to confirm that the NSA eavesdrops on Americans or whether he played any role, in his previous job as White House counsel, in providing legal justification for the program.

Gonzales said Mr. Bush is waging an aggressive fight against terrorism, but one that is "consistent with the Constitution."

But he said generally that the government has an intense need for information in the struggle. "Winning the war on terrorism requires winning the war of information We are dealing with a patient, diabolical enemy who wants to harm America," Gonzales said at a news conference at the Justice Department on child prostitution arrests.

The administration had briefed congressional leaders about the NSA program and notified the judge in charge of the Foreign Intelligence Surveillance Court, the secret Washington court that handles national security issues.

An aide to West Virginia Sen. Jay Rockefeller, the top Democrat on the Senate Intelligence Committee, told CBS News the senator will not comment on the program today. Aides to National Intelligence Director John Negroponte declined to comment Thursday night.