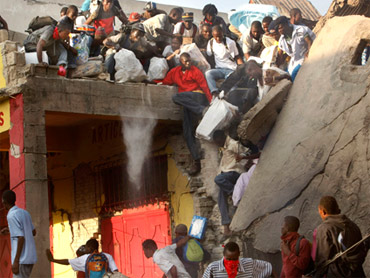 Troops, doctors and aid workers flowed into Haiti on Monday even while victims of the quake that killed an estimated 200,000 people still struggled to find a cup of water or a handful of food.

European nations pledged more than a half-billion dollars in emergency and long-term aid, on top of at least $100 million promised earlier by the U.S.

But help was still not reaching many victims of Tuesday's quake - choked back by transportation bottlenecks, bureaucratic confusion, fear of attacks on aid convoys, the collapse of local authority and the sheer scale of the need.

The security situation in Haiti is stable, said Rear Admiral Mike Rogers. "There is nothing inhibiting our missions," he said. "There is no sense of widespread panic." Some looting is going on, he noted, but teams on the ground are able to "execute the full range of operations."

Looting spread to more parts of downtown Port-au-Prince as hundreds of young men and boys clambered up broken walls to break into shops and take whatever they can find. Especially prized was toothpaste, which people smear under their noses to fend off the stench of decaying bodies.

Complete Coverage: Devastation in Haiti
Haiti Quake: How You Can Help

At one place, youths fought over a stock of rum with broken bottles, machetes and razors, and police fired shots into the air to break up the crowd.

"I am drinking as much as I can. It gives courage," said Jean-Pierre Junior, wielding a broken wooden plank with nails to protect his bottle of rum.

Keen said some 2,000 Marines were set to join 1,000 U.S. troops on the ground and U.N. Secretary-General Ban Ki-moon announced Monday he wants 1,500 more U.N. police and 2,000 more troops to join the existing 7,000 military peacekeepers and 2,100 international police in Haiti.

While aid workers tried to make their way into Haiti, many people tried to leave. Hundreds of U.S. citizens, or people claiming to be, waved IDs as they formed a long line outside the U.S. Embassy in hopes of arranging a flight out of the country.

Roughly 200,000 people may have been killed in the magnitude-7.0 quake, the European Union said, quoting Haitian officials who also said about 70,000 bodies have been recovered so far.

EU officials estimated that about 250,000 were injured and 1.5 million were homeless.

Even many people whose houses survived are living outside for fear unstable buildings could collapse in aftershocks.

So many people have lost homes that the World Food Program is planning a tent camp for 100,000 people - an instant city the size of Burbank, California - on the outskirts of Port-au-Prince, according to the agency's country director, Myrta Kaulard.

On the streets, people were still dying, pregnant women were giving birth and the injured were showing up in wheelbarrows and on people's backs at hurriedly erected field hospitals.

Water began to reach more people around the capital and while fights broke out elsewhere, people formed lines to get supplies handed out by soldiers at a golf course. Still, with a blocked city port and relief groups claiming the U.S.-run airport is being poorly managed, food and medicine are scarce. Anger mounted hourly over the slow pace of the assistance.

"White guys, get the hell out!" some survivors shouted in the city's Bel-Air slum, apparently frustrated at the sight of foreigners who were not delivering help.

Six days after the quake, dozens of rescue crews were still trying to rescue victims trapped under piles of concrete and debris.

She said some might survive until Monday - and a few special cases could make it further: Rescuers pulled a 30-year-old man and a 40-year-old woman from a ruined supermarket on Sunday. Officials said they had had survived for so long by eating food where they were trapped.

Stunned by images of the disaster, the European Union Commission said it would contribute €330 million ($474 million) in emergency and long-term aid to Haiti.

"The impact of this earthquake is magnified because it has hit a country that was already desperately poor and historically volatile," said British Development Secretary Douglas Alexander.

U.S. officials, meanwhile, responded to criticism that they have given priority to military and rescue flights at the single-runway airport, which has room to park only a few planes at a time.

The U.N. World Food Program announced that American officials have agreed to a system giving humanitarian flights priority in landings.

French and Brazilian officials have complained that critical aid flights were not given permission to land and the Haiti operations manager for Doctors Without Borders, Benoit Leduc, said the diversion of three cargo planes to the neighbouring Dominican Republic had slowed urgent medical aid.

"It's a fact. We are two days behind on the operations because of this access," he said. "Of course it's a small airport ... But it's clearly a matter of defining priorities."

With U.S. forces taking a major part in the relief effort, .

"This is about helping Haiti, not about occupying Haiti," Joyandet said.

Foreign Minister Bernard Kouchner, however, urged governments not to squabble over the problem, telling France-Info radio that "people always want it to be their plane ... that lands."

, shaking hands with U.S. troops before heading into a building at the end of the runway that houses commanders of the Joint Task Force-Haiti. Clinton is the U.N. special envoy for Haiti and he has joined former President George W. Bush in leading a campaign for donations to help the country.