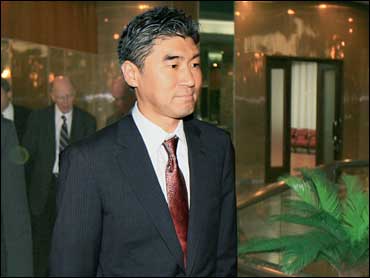 International talks on North Korea's nuclear program to firm up a deadline for the country to disable any nuclear bomb-producing facilities have been postponed, officials said Monday.

The talks had been expected to start around the middle of this week, but Japanese and South Korean officials said they would instead meet at a later date that has not yet been set. No reason for the delay was given.

The six-nation talks - among China, Japan, Russia, the United States and the two Koreas - have dragged on for years and been beset by delays, but have this year finally made some progress. The North shut down its sole operating nuclear reactor in July, and had been displaying willingness to take further steps in exchange for political and economic concessions.

Last week, nuclear experts from the U.S., China and Russia visited the North's nuclear facilities to discuss technical details of disabling them and they reportedly reached an agreement with Pyongyang on how to proceed.

That had led the sides to expect the talks to begin this week, in order to finalize the timeline for disablement that the six countries were unable to set at the last session in July. Disabling the facilities would mean they cannot be easily restarted to produce more plutonium that can be used in bombs.

On Friday, U.S. Assistant Secretary of State Christopher Hill said in Washington that the talks were expected to begin in the middle of this week.

A Japanese Foreign Ministry official said Monday that host China had informed Japan on Monday that the talks would be postponed. China gave no reason for the postponement and gave no new date for the start of talks, the official said on condition of anonymity due to policy.

Another South Korean Foreign Ministry official, also speaking on condition of anonymity due to policy, confirmed the talks would not begin Wednesday as had been previously expected.

South Korean presidential spokesman Cheon Ho-seon said that "nothing has been fixed."

"Now, no one is talking about the suspicions regarding North Korea and Syria with a clear basis," Yonhap news agency quoted South Korean Foreign Minister Song Min-soon as telling reporters. The Foreign Ministry said it could not immediately confirm the report.

His comments came amid suspicions North Korea is possibly cooperating with Syria on a nuclear facility, which arose after an alleged Israeli air raid earlier this month on unknown Syrian targets.

A senior U.S. nuclear official said Friday that North Koreans were in Syria and that Syria may have had contacts with "secret suppliers" to obtain nuclear equipment.

Andrew Semmel, acting U.S. deputy assistant secretary of state for nuclear nonproliferation policy, did not identify the suppliers, but also said he could not exclude that the network run by disgraced Pakistan nuclear scientist A.Q. Khan may have been involved.

However, Song said Monday that Syria does not have a nuclear facility as far as he knows, according to Yonhap.

A state-run newspaper in Syria said in an editorial Sunday referring to the nuclear allegations that "the magnitude of these false accusations might be a prelude to a new aggression against Syria." Al-Thawra said suggestion of such nuclear cooperation was "a flagrant lie."