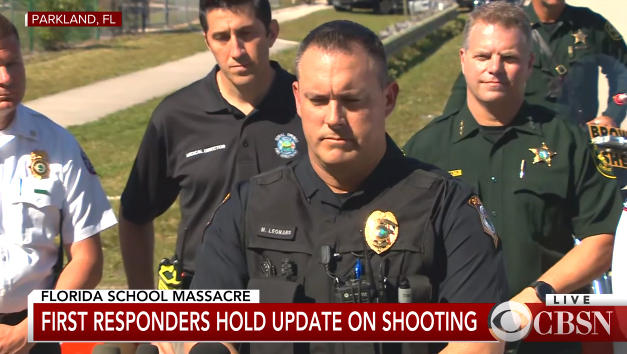 A law enforcement source told CBS News senior investigative producer Pat Milton that the suspect, former student Nikolas Jacob Cruz, escaped the school undetected following the shooting massacre by blending in with students rushing to evacuate the school.  Authorities identified Cruz as the shooter on school surveillance video, according to the source.

Cruz was arrested in a nearby residential neighborhood.

The arresting officer, officer Michael Leonard with the Coconut Creek police department, said Thursday that he was at his department's headquarters in the neighboring town when he received a call about the shooting. He said he responded to the high school to see if he could help.

He heard information over radio dispatch about the description of the suspect, who was still being sought. Leonard said he decided to patrol the heavily residential area near the school to search for the suspect.

As he was driving down a back road, he said he saw a teen walking on a sidewalk that matched the suspect's description. He said he looked like a "typical high school student."

"For a quick moment I thought could this be the person, is this who I need to stop? Training kicked in. I pulled my vehicle over immediately. I engaged the suspect. He complied with my commands," Leonard said. "He was taken into custody without any issues."

Cruz was booked into the Broward County Jail early Thursday. The 19-year-old appeared in court Thursday afternoon in an orange jumpsuit. The judge in the case ordered Cruz held without bond.