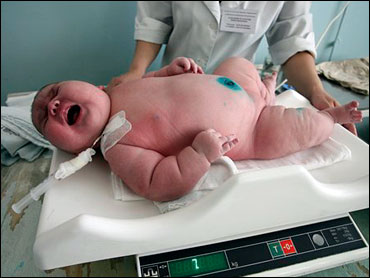 A small Russian city just got a really big addition: a 17-pound, 1 ounce baby whose mother had already delivered 11 other children.

Tatiana Khalina, 42, delivered the girl by Caesarean section at a maternity clinic in Aleisk, a town of 30,000 people in the Altai region in southern Siberia, a nurse at the clinic said Thursday.

Nurse Svetlana Gildeyeva also said the Sept. 17 birth went smoothly, and mother and the child were fine. She said the baby, Nadezhda, was transferred from the small clinic to a maternity hospital in Barnaul, a larger city.

The girl was feeling well and developing normally, said Irina Kurdeka, a doctor at the Barnaul hospital.

The daily Moskovsky Komsomolets quoted the local social services chief, Marina Alistratova, as saying the family had modest means. She said Khalina's husband was on contract with a local military unit.

"We have presented them with a good washing machine, a food package and a card," Alistratova told the newspaper. "We will keep supporting them in the future."

An average weight for newborn babies is around 7 pounds, 1 ounce, according to international statistics.

The Guinness Book of World Records says the heaviest baby ever was born in the United States in 1879. It weighed 23 pounds, 12 ounces and died 11 hours after birth. Guinness says they heaviest surviving baby was born in 1955 in Italy, weighing in at 22 pounds, 8 ounces.