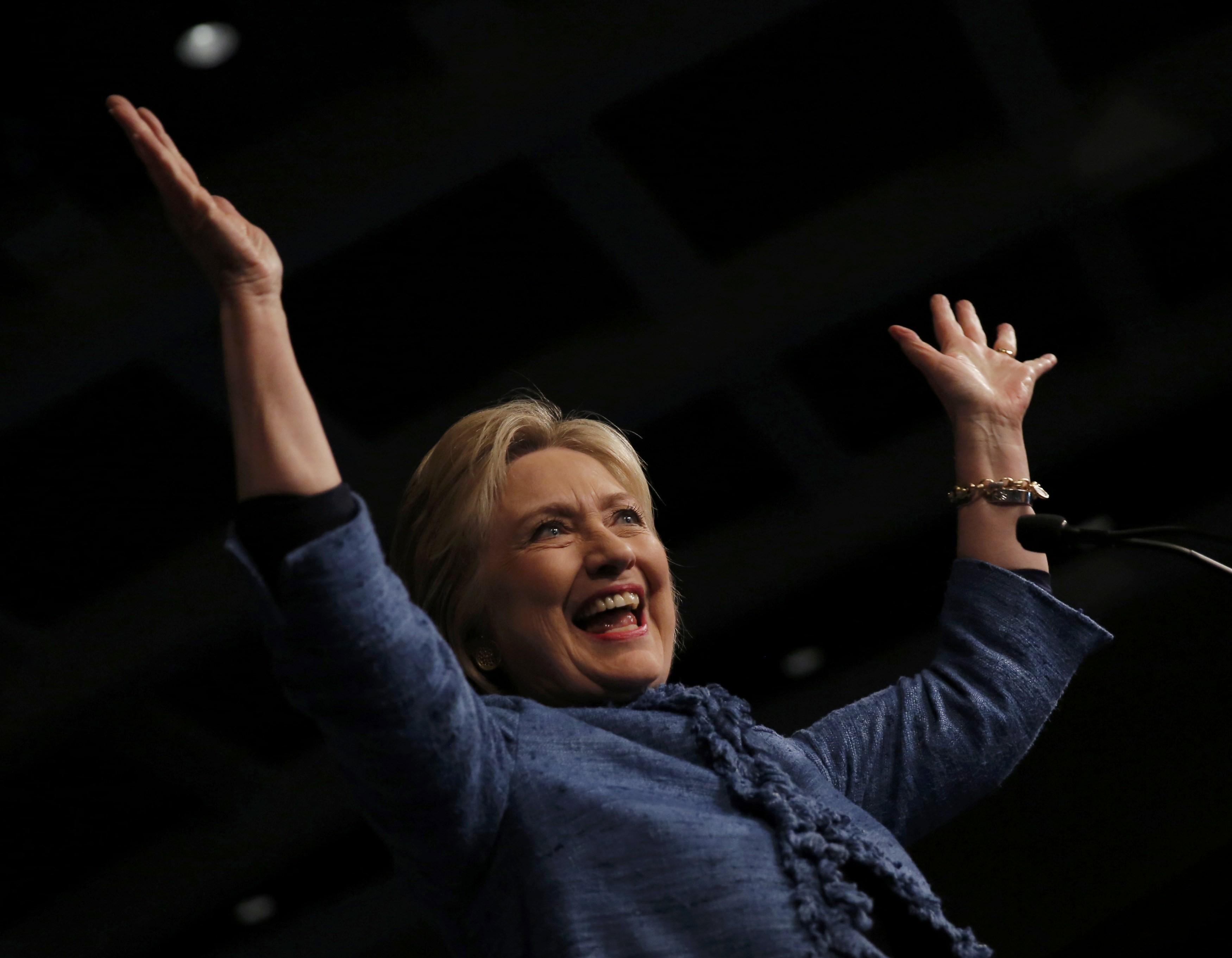 12:34 a.m. (Wednesday) The last state we're waiting on for Democrats is Missouri, where Sanders narrowly leads. Here's why it's so close:

Sanders has the advantage with liberals, while moderates are going for Clinton. The economy also plays a role. Forty-three percent say trade with other countries hurts U.S. jobs, and 52 percent of them are backing Sanders. Thirty-six percent are very worried about the nation's economy -- and they back Sanders too, 54 percent to 45 percent.

9:04 p.m. Following her third victory of the night, in Ohio, Clinton spoke to supporters in West Palm Beach, Fla.

"We are moving closer to securing the Democratic Party nomination and winning this election in November," she said.

The candidate also referenced Sanders, and thanked him for a hard-fought campaign: "I want to congratulate Sen. Sanders for the vigorous campaign he's waging," she said.

8:42 p.m. Here are some of the top stats out of Missouri, based on the exit polls:

Sanders is leading among men (59 percent) in Missouri, while Clinton just holds a slight edge among women (50 percent to 48 percent). Sanders also has the advantage with liberals, with 57 percent backing him, while moderates are going for Clinton (54 percent).

The majority of Missouri primary voters say that Sanders (58 percent) inspires them more about the future of the country. Similar to the results in Ohio, Sanders has an edge among those who say trade hurts jobs (43 percent of Democratic voters). He wins the group with 59 percent.

8:24 p.m. As the results come in from Illinois, here's what the exit polls say about the Clinton-Sanders race there:

Women are breaking for Clinton (54 percent), while men are going for Sanders (56 percent). Just over a quarter of voters (27 percent) are African American, Clinton is getting about 69 percent of them, while 30 percent are for Sanders -- far higher than his margins in most other states that have voted thus far. Sanders currently has the backing of 60 percent of white voters.

Of those who think that trade with other countries will take away U.S. jobs (46 percent), the majority of them, 59 percent, support Sanders. The Vermont senator has criticized Clinton over her support for trade deals like the North American Free Trade Agreement.

8:07 p.m. With Clinton picking up her first victory of the night in Florida, here's what the exit polls say about how she did it:

Although Clinton continues to carry her strong support among older voters, with 72 percent of those over 45 voting for her, Sanders does not have the stronger support among young voters in Florida. Among the Florida primary voters, the support among the 18- to 44-year-olds is much closer, with 52 percent voting for Sanders and 48 percent for Clinton.

More than half of voters (54 percent) want to continue Obama's policies, and 75 percent of those voters chose Clinton.

The majority of Florida primary voters see Clinton's policies as realistic (78 percent), while less than half think Sanders' policies are realistic. Almost three-quarters feel that Clinton would have the better chance to defeat Donald Trump in November.

Of the 17 percent of voters who made their decision in the last week, 61 percent broke for Clinton.

CBS News reports that the Democratic race is a toss-up between Clinton and Sanders in Illinois and Missouri.

7:53 p.m. And we've got exit polling data out of Ohio, too. Here are the highlights:

Sixty-two percent of Democratic voters believe that Clinton has the better chance to defeat Donald Trump in November. The majority of Ohio Democratic primary voters (53 percent) believe Clinton would make the best commander-in-chief.

The Ohio trends in age are similar to North Carolina: Clinton continues to perform well with older voters, with 65 percent of those over 45 voting for Clinton, while Sanders takes 70 percent of the 18- to 44-year-old Ohio primary voters.

Of those identifying as independent, 70 percent support Sanders. The majority (63 percent) of non-white voters support Clinton.

Thirty-one percent of Ohio Democratic voters feel Clinton's views on business are too pro-business, while 27 percent feel that Sanders is too anti-business. Of the voters who decided in the last week, 60 percent are backing Sanders.

7:40 p.m. Now that the polls are closed in North Carolina, here's some interesting stats from the exit polling there:

The majority of North Carolina Democratic voters (59 percent) believe that race relations have gotten worse in this country in the last few years. Of those, support is split with 49 percent supporting Clinton and 46 percent supporting Sanders.

Only 58 percent of North Carolina primary voters think that Clinton is honest and trustworthy, while 82 percent believe that Sanders is honest and trustworthy. Sanders's policies are thought to be realistic by just over half (54 percent) of North Carolina primary voters, whereas Clinton's policies are seen as realistic by 79 percent of voters.

Over half (52 percent) of North Carolina primary voters who made their decision within the last week support Sanders.

Clinton is seen as the candidate who would make the best commander in chief by 56 percent of North Carolina primary voters. When asked who would have the better chance to defeat Donald Trump in November, 66 percent say Clinton.

6:04 p.m. With just under an hour until the first polls begin to close in Florida, here's a reminder of what's at stake delegate-wise tonight:

5:56 p.m. Here are some more facts from the Democratic exit polls so far:

And in the wake of conversations about police brutality and violence against African Americans, the majority of primary voters in all states thought race relations in this country have gotten worse. That figure is highest in North Carolina (60 percent) and Missouri (59 percent); it's lowest in Florida (45 percent).

5:15 p.m. The first round of early exit polling is in from the five states that vote tonight. Here are some interesting statistics:

Across the board, Democrats named the economy and jobs as their most important issue. As for candidate qualities, the exit polls show a mixed result: in Illinois and Missouri, a candidate who is "honest and trustworthy" was deemed most important, while in North Carolina and Ohio it was one who "cares about people." In Florida, the top candidate quality was someone who has the "right experience."

And a majority of Democrats in each state except Ohio said they want to see the next president continue President Obama's policies, rather than pursuing policies that are more or less liberal. (In Ohio, 48 percent said they want someone to continue Obama's policies, while 34 percent wanted more liberal policies and 12 percent wanted less liberal policies.)

The biggest prizes on the map Tuesday are Ohio and Florida, both general-election swing states. Though Clinton appears to have a solid lead in Florida, things look tighter in Ohio--and after Sanders's upset victory in Michigan next week, observers wonder whether he'll be able to pull off any similar surprises this week.

For Democrats, 691 delegates total are at stake across the five states. According to CBS News' latest count, Clinton leads with 1,222 delegates to Sanders's 565. A candidate needs 2,383 delegates to win the nomination.

Most of Florida closes at 7 p.m. ET, but the panhandle in the western part of the state is in the central time zone -- that part closes at 8 p.m. ET. Polls close in Ohio and North Carolina at 7:30 p.m. ET and in Missouri and Illinois at 8 p.m. ET.