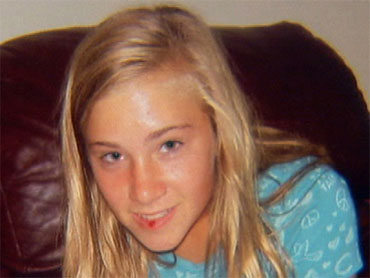 Ten miles from home, a 13-year-old girl was found bound and gagged but alive four days after disappearing with her family. The whereabouts of her mother, brother and another woman remained a mystery, however.

A man was arrested Sunday at the home where Sarah Maynard was found in this central Ohio city, and authorities hope he will provide information leading to the others, Knox County Sheriff David Barber said.

"We were hopeful that we would find more than one" of the missing people in the house of Matthew J. Hoffman, Barber said. "Our information was definite that it was most likely that Sarah was going to be in that house."

Barber did not say what led investigators to the two-story tan-sided house where they found the girl bound in the basement. Hoffman, a 30-year-old ex-con, was arrested without a struggle about 8 a.m. on Sunday by a SWAT team that blasted their way through the front door, reports CBS News correspondent Dean Reynolds. He's been charged with kidnapping.

Barber said more charges are expected against Hoffman, who lives at the home about 40 miles north of Columbus.

Pat Brown, a criminal profiler, raised the possibility on CBS' "The Early Show" that Hoffman may not have acted alone.

This whole case is like an incredible mystery. … I can't imagine how this man worked alone. We are looking at this [and] a lot of people [are] saying this guy wanted that 13-year-old girl. When you have a sex predator he wants that teen-aged, girl she is usually walking down the street one day, he's watching from a nearby house. She's home alone, he grabs her. Why would he go in there and take a 13-year-old girl when he knows everybody else is there, as well? There were two cars parked that driveway. It doesn't make sense that was the entire motivation here and he'd do this alone taking four people with him. It's a little confusing. I think there might be somebody else involved.

Hoffman was being held in the county jail, where personnel would not comment on whether he had an attorney. A bond hearing was expected to be held Monday.

Barber said the girl was hospitalized in good condition, but he would give no details and did not say if she had been sexually abused.

"Well, it's not very good news," Brown said. "Obviously we know one has been severely injured and the simple fact they are somewhere out there and we don't know where and this man is not telling us leads me to believe something probably not too good has happened to them."

Authorities believe the girl had been "under the control" of Hoffman since Wednesday, when she and her brother last attended school, the sheriff said. He did not know if Hoffman was connected to either Herrmann or Sprang, but said he is not the ex-boyfriend of either woman.

Authorities had talked to the girl but would not release any details because the investigation is ongoing, Barber said.

The house with green shutters and front door and a large television antenna on the roof sits in a lower-middle-income neighborhood with two bars within a block. Holly grows through the weathered slats of the porch. A sheet covered one window, and blinds were pulled down on the rest.

Dawna Davis, 35, who lives next door to Hoffman, said she told her children to stay indoors when he was out. She said he moved in alone about a year ago and that a girlfriend lived with him temporarily with her son until about a month ago.

Davis said Hoffman did tree trimming work and had built a fire Wednesday night in his backyard, where there was a mound of ashes Sunday with tree parts on it. She said he walked to a nearby park with a lake almost every day and was a "nature person" who collected leaves.

Attempts to reach relatives of Hoffman and of Sarah were unsuccessful Sunday.

Herrmann was reported missing Wednesday when she did not show up for work at a local Dairy Queen. Barber has said blood indicating an injury had been found in her home, where Sprang's vehicle was in the driveway.

Herrmann's pickup truck had been found Thursday night near the Kenyon College campus, leading to a lockdown at the school.