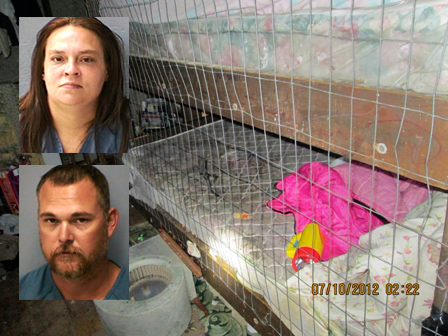 (CBS/AP) LANCASTER, Ohio - The parents of a 4-year-old Ohio girl who authorities say was confined at night in a bed wrapped with steel mesh fencing have been charged with kidnapping and child endangerment.

Deputies found the cage-like contraption when they were responding to a domestic violence call from the family's home in central Ohio, Phalen said Thursday. The steel wire surrounded the lower bunk bed where the girl slept, and a door had been fashioned into the steel fence. It had a screen-door hook and a sliding dead bolt on the outside.

Phalen said the girl was not in the bed at the time, but that when deputies questioned the parents about the fencing, they told them they confined the girl in her bed at night to keep her from getting up.

"Aside from the concern about psychological damage from the child being kept in a cage-type setting, there is also the concern that in a fire or another emergency the child couldn't get out," Phalen said.

The girl and an 8-month-old sibling were removed from the home and were in the custody of the county's child protective services, according to the sheriff.

He described the home as "filthy, without even a sheet on the girl's bed."

County Prosecutor Gregg Marx said his office is considering additional charges and expects to present the case to a grand jury this month.

Pleasantville is about 40 miles southeast of Columbus.