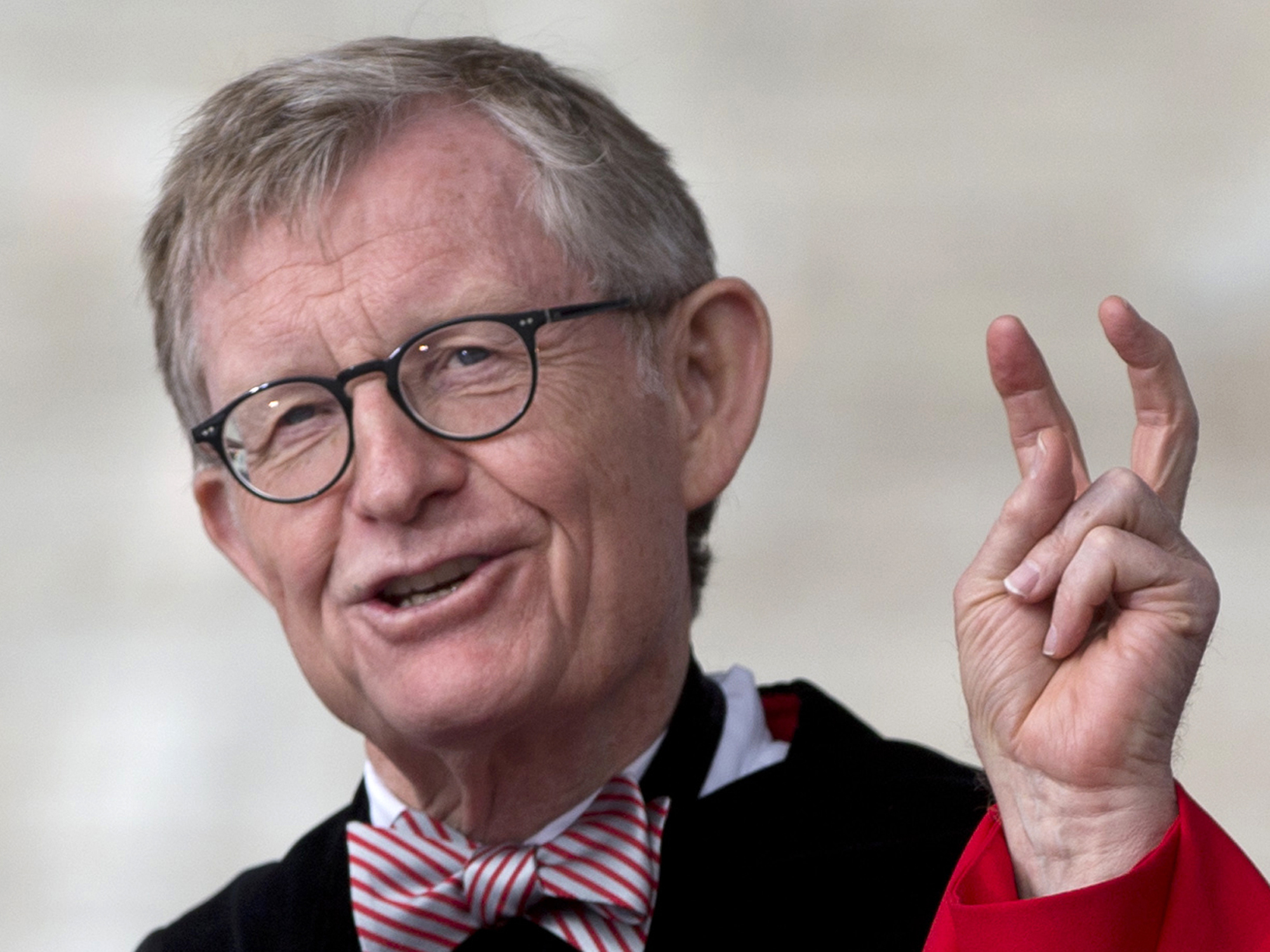 The trustees say in a letter to president Gordon Gee that his comments risk diminishing the collective efforts of the university and of Gee's own good work.

The March 11 letter was obtained Friday by The Associated Press.

It lays out several steps Gee must take following the revelation of remarks he made last year jabbing Notre Dame, Roman Catholics and the Southeastern Conference.

Those steps include issuing personal apologies and getting help from professionals to revisit Gee's personal communications and speechwriting processes.

"For the leader of a renowned university, inappropriate comments about particular groups, classes of people or individuals are wholly unacceptable and are not in line with what we aspire to be as an institution of higher education," Schottenstein said in a statement.

Gee said Notre Dame was never invited to join the Big Ten conference because the university's priests are not good partners, joking that "those damn Catholics" can't be trusted, according to a recording of a meeting he attended late last year.

Gee also took shots at schools in the SEC and the University of Louisville, according to the recording of the December meeting of the school's Athletic Council that The Associated Press obtained under a public records request.

Gee's remediation plan will "address his behavior that reflects the Board's commitment to returning to the core messaging of the university and its leadership," Schottenstein said.

Ohio State trustees learned of Gee's "offensive statements" in January, met with the president at length and created the remediation plan, Schottenstein said.

Gee was on a long-planned family vacation and unavailable for comment, Ohio State spokeswoman Gayle Saunders said. He apologized in a statement released to the AP.

"The comments I made were just plain wrong, and in no way do they reflect what the university stands for," he said in the statement. "They were a poor attempt at humor and entirely inappropriate. There is no excuse for this and I am deeply sorry."

Gee told members of the council that he negotiated with Notre Dame officials over joining the Big Ten during his first term at Ohio State, which began more than two decades ago.

"The fathers are holy on Sunday, and they're holy hell on the rest of the week," Gee said to laughter at the Dec. 5 meeting attended by Athletic Director Gene Smith, several other athletic department members, professors and students.

"You just can't trust those damn Catholics on a Thursday or a Friday, and so, literally, I can say that," said Gee, a Mormon.

In the recording, Gee referred specifically to dealing with the Rev. Ned Joyce, Notre Dame's longtime executive vice president, who died in 2004.

"Father Joyce was one of those people who ran the university for many, many years," Gee said.

Gee said the Atlantic Coast Conference, which added Notre Dame in all sports except football and hockey, did so at a time when it was feeling vulnerable.

"Notre Dame wanted to have its cake and eat it, too," Gee said, according to the recording and a copy of the meeting's minutes.

"Regrettable" and "inappropriate" summed up the reactions from universities mentioned by Gee at the meeting, including Notre Dame, Louisville, Kentucky and schools in the Southeastern Conference.

Gee has gotten in trouble before for offhand remarks, most recently during a memorabilia-for-cash and tattoos scandal under football coach Jim Tressel's watch.

Gee was asked in March 2011 whether he had considered firing Tressel. He responded: "No, are you kidding? Let me just be very clear: I'm just hopeful the coach doesn't dismiss me." Tressel stepped down three months later.

Last year, Gee apologized for comparing the problem of coordinating the school's many divisions to the Polish army, a remark that a Polish-American group called bigoted and ignorant.

In 1992, in a moment of frustration over higher-education funding, Gee told a student newspaper reporter, "the governor's a damn dummy." Then-Gov. George Voinovich laughed it off, and the two became allies.

Gee was named the country's best college president in 2010 by Time magazine, and he has one of the highest-profile resumes of any college leader in recent history. He has held the top job at West Virginia University, the University of Colorado, Brown University and Vanderbilt University. He was Ohio State president from 1990 to 1997 and returned in 2007.

Gee earns about $1.9 million annually in base pay, deferred and performance compensation and retirement benefits.

He is a prolific fundraiser and is leading a $2.5 billion campaign at Ohio State. He is omnipresent on campus, attending everything from faculty awards events to dormitory pizza parties. He is known for his bow ties — he has hundreds — and his horn-rimmed glasses.

During his comments to the Athletic Council, Gee also questioned the academic integrity of schools in the Southeastern Conference and the University of Louisville.

The top goal of Big Ten presidents is to "make certain that we have institutions of like-minded academic integrity," Gee said. "So you won't see us adding Louisville," which is also joining the ACC.

After a pause followed by laughter from the audience, Gee added that the Big Ten wouldn't add the University of Kentucky, either.

"We understand this is not the first time President Gee has made statements he has regretted," said Louisville spokesman Mark Hebert.

During the meeting, Gee also said he thought it was a mistake not to include Missouri and Kansas in earlier Big Ten expansion plans. Missouri has since joined the SEC.

"You tell the SEC when they can learn to read and write, then they can figure out what we're doing," Gee said when asked by a questioner how to respond to SEC fans who say the Big Ten can't count because it now has 14 members.

Gee noted he was chairman of the SEC during his time as Vanderbilt University chancellor. He also told the audience that speculation about the SEC "remains right here," according to the recording.

Gee took a swipe at Big Ten Commissioner Jim Delany, one of the most powerful leaders in college athletics, when he answered a question about preserving Ohio State's financial interests in light of Big Ten revenue-sharing plans.

"No one admires Jim Delany more than I do. I chaired the committee that brought him here," Gee said. "Jim is very aggressive, and we need to make certain he keeps his hands out of our pockets while we support him."