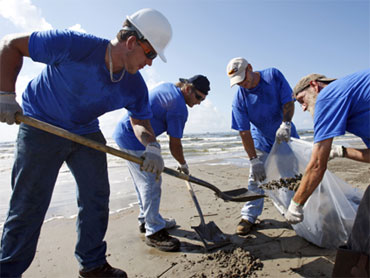 The gooey oil washing into the maze of marshes along the Gulf Coast could prove impossible to remove, leaving a toxic stew lethal to fish and wildlife, government officials and independent scientists said.

Officials are considering some drastic and risky solutions: They could set the wetlands on fire or flood areas in hopes of floating out the oil.

But they warn an aggressive cleanup could ruin the marshes and do more harm than good. The only viable option for many impacted areas is to do nothing and let nature break down the spill.

More than 50 miles of Louisiana's delicate shoreline already have been soiled by the massive slick unleashed after BP's Deepwater Horizon burned and sank last month. Officials fear oil eventually could invade wetlands and beaches from Texas to Florida. Louisiana is expected to be hit hardest.

On Saturday, a major pelican rookery was awash in oil off Louisiana's coast. Hundreds of birds nest on the island, and an Associated Press photographer saw some birds and their eggs stained with the ooze. Nests were perched in mangroves directly above patches of crude.

Plaquemines Parish workers put booms around the island, but puddles of oil were inside the barrier.

"Oil in the marshes is the worst-case scenario," said Coast Guard Adm. Thad Allen, the head of the federal effort to contain and clean up the spill.

Also Saturday, BP told federal regulators it plans to continue using a contentious chemical dispersant, despite orders from the Environmental Protection Agency to look for less toxic alternatives. BP said in a letter to the EPA that Corexit 9500 "remains the best option for subsea application."

Oil that has rolled into shoreline wetlands now coats the stalks and leaves of plants such as roseau cane - the fabric that holds together an ecosystem that is essential to the region's fishing industry and a much-needed buffer against Gulf hurricanes. Soon, oil will smother those plants and choke off their supply of air and nutrients.

In some eddies and protected inlets, the ochre-colored crude has pooled beneath the water's surface, forming clumps several inches deep.

With the seafloor leak still gushing hundreds of thousands of gallons a day, the damage is only getting worse. Millions of gallons already have leaked so far.

Over time, experts say weather and natural microbes will break down most of the oil. However, the crude will surely poison plants and wildlife in the months - even years - it will take for the syrupy muck to dissipate.

Back in 1989, crews fighting the Exxon Valdez tanker spill - which unleashed almost 11 million gallons of oil into Alaska's Prince William Sound - used pressure hoses and rakes to clean the shores. The Gulf Coast is just too fragile for that: those tactics could blast apart the peat-like soils that hold the marshes together.

Hundreds of miles of bayous and man-made canals crisscross the coast's exterior, offering numerous entry points for the crude. Access is difficult and time-intensive, even in the best of circumstances.

"Just the compaction of humanity bringing equipment in, walking on them, will kill them," said David White, a wetlands ecologist from Loyola University in New Orleans.

Marshes offer a vital line of defense against Gulf storms, blunting their fury before they hit populated areas. Louisiana and the federal government have spent hundreds of millions rebuilding barriers that were wiped out by hurricanes, notably Katrina in 2005.

They also act as nursery grounds for shrimp, crabs, oysters - the backbone of the region's fishing industry. Hundreds of thousands of migratory birds nest in the wetlands' inner reaches, a complex network of bayous, bays and man-made canals.

That plan is awaiting approval from the U.S. Army Corps of Engineers. If large volumes of oil make it through passes, the cleanup will become far more difficult as oil spreads into the bayous and canals.

Smaller spills have been occurring in the marshes for decades. In the past, cleanup crews would sometimes slice out oiled vegetation and take it to a landfill, said Andy Nyman with Louisiana State University.

But with the plants gone, water from the gulf would roll in and wash away the roots, turning wetlands to open water.

Adm. Allen said that where conditions are right, an "in-situ burn" could be used to set oil-coated plants ablaze.

Nyman and other experts, though, warn it's trickier than simply lighting a fire. If the marsh is too wet, the oil won't burn. Too dry, the roots burn and the marsh can be ruined.

Representatives from BP PLC - which leased the sunken rig and is responsible for the cleanup - said Saturday that cleanup crews have started more direct cleanup methods along Pass a Loutre in Plaquemines Parish. Shallow water skimmers were attempting to remove the oil from the top of the marsh.

Streams of water could later be used in a bid to wash oil from between cane stalks.

In other cases, the company will rely on "bioremediation" - letting oil-eating microbes do the work.

"Nature has a way of helping the situation," said BP spokesman John Curry.

But White, the Loyola scientist, predicted at least short-term ruin for some of the wetlands he's been studying for three decades. Under a worst-case scenario, he said the damage could exceed the 217 square miles of wetlands lost during the 2005 hurricane season.

"When I say that my stomach turns," he said.