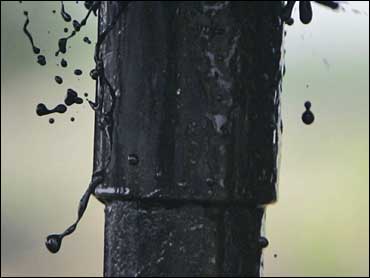 Oil prices fell more than 2 percent Tuesday after a new report from Washington projected a cumulative $7 trillion U.S. deficit for the next decade.

Minutes before the nonpartisan Congressional Budget Office released its deficit forecast, however, crude briefly touched $75 a barrel for the first time in 10 months on new signals that consumers are feeling a little better about the economy.

Questions about when energy demand will rebound has led to volatile prices and that uncertainty played out again on energy markets Tuesday.

"Oil still struggles to follow through decisively with an upside breakout," PFGBest Research analyst Phil Flynn said in a note to clients Tuesday. "Is oil destined to make new highs, or is it just a matter of time before we see a correction of massive proportions?"

Benchmark crude for October delivery fell $1.59 to $72.78 a barrel in trading on the New York Mercantile Exchange.

The New York-based Conference Board provided a bit of good news when it said its Consumer Confidence index rose to 54.1 from an upwardly revised 47.4 in July. Economists surveyed by Thomson Reuters had expected a slight increase to 47.5.

Still, the index is well below 90, the minimum level associated with a healthy economy. Anything above 100 signals strong growth.

Energy prices have risen sharply this year mostly on the belief that the economy is getting better and demand will rebound soon. Still, the rules of supply and demand still apply to current prices and on Wednesday, the government will release its weekly report on how much supply we have.

Last week, a surprise drawdown in crude began a rally that ran through Monday, the fourth-consecutive day in which oil prices moved higher.

Despite optimism about recovery from recession, analysts say energy demand remains in the doldrums and seasonally lower demand for gasoline as the summer holidays end will exacerbate that weakness.

"In my view, oil prices will likely give in to the fundamentals in the coming week," said Victor Shum, an energy analyst with consultancy Purvin & Gertz in Singapore. "Seasonally, oil demand is lower in autumn, so reduced demand in the shoulder season may put further pressure on oil."

U.S. gasoline prices remain pretty much flat as the peak driving season comes to and end.

Retail gas prices fell less than a penny overnight to a new national average of $2.623 a gallon, according to auto club AAA, Wright Express and Oil Price Information Service. A gallon of regular unleaded is 13.1 cents more expensive than it was a month ago, but it's $1.058 cheaper than last year.

The Energy Department late Monday reported that prices at the pump moved lower for the second straight week.