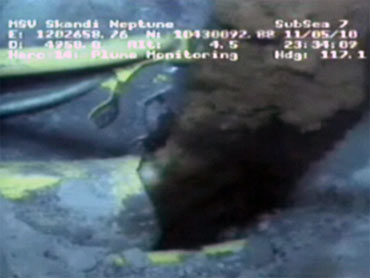 Federal regulators have approved the use of a technique to fight the ballooning oil spill in the Gulf of Mexico by shooting chemical dispersants 5,000 feet beneath the sea.

The chemicals break apart the oil and keep it from reaching the surface.

U.S. Coast Guard Rear Adm. Mary Landry said Friday that three previous tests were conducted on the technique at the leak site. She says scientists with the U.S. Environmental Protection Agency and the National Oceanic and Atmospheric Administration got enough data to approve its use.

Landry says, however, that the "unprecedented" deep-sea injections of dispersants have not yet been used, aside from the three tests. She says officials are taking time to study the practice.

With the oil slick growing in the Gulf, BP's about to begin its latest fix, threading a tube a mile down into the hole of the gushing pipeline. Once in place, it would funnel most of the oil to a surface ship.

"To my knowledge, it hasn't been done before," BP's Doug Suttles told reporters.

"I've been crabbing for almost 40 years," one fisherman told CBS News. "It's the first time I couldn't make a living."

"Got to do something," another fisherman told CBS News. "It's just like after Katrina."

"The cleanup operations would be 10 times more difficult than had previously been thought," Steve Werely, a professor of mechanical engineering at Purdue University, told CBS News.

Any hope of stopping the leak rests with as many as six remotely operated vehicles, called ROV's.

Pressure-stabilized - with lights and a high resolution camera - the ROV's are uniquely able to work in the deep sea's crushing pressures, cold and zero visibility.

"It's the harshest conditions known to man, even harsher than space," Mark Campbell, a manager at ROV Manufacturing, told Strassmann.

One ROV is strong enough to lift around a ton and nimble enough to hand over a tool, all a mile underwater.