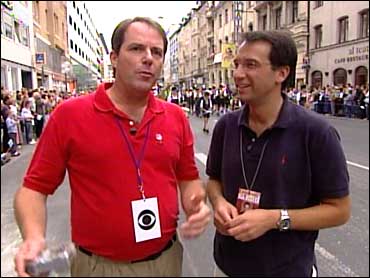 Dave Price is just back from a whirlwind weekend in Munich, Germany, where he and a special guest got to take part in Oktoberfest up close and personal, thanks to their "All-Access" pass.

On Friday in Chicago, Dave selected David Curtis of Shelby Township, Mich., out of a crowd to accompany him to the fun.

On The Early Show Tuesday, Dave gave viewers a glimpse at what he and David were up to overseas.

Suffice is to say, beer was never far from their minds – or their lips!

They flew there and back on a Lufthansa jetliner and got their own, beautiful suites in the famous Bayerischer Hof Hotel, described by Dave as the "finest hotel in Munich."

Their first stop was the official kickoff to the nearly 200-year-old Oktoberfest, where their "All-Access" passes got them access to the parade — to take part, not just watch.

David noted they could "smell the horses, we're so close!"

But Dave pointed out that, "In order to experience Oktoberfest in all its glory, you really have to dress for the occasion," so the two donned actual lederhosen, though their sneakers looked more than a bit out of place.

"I can guarantee," David assured Dave, "I never drank a beer in lederhosen!"

That, of course, changed, for sure.

Next stop, an amusement park, followed by a band shell crammed with some 8,000 people, all living it up, drinking up, and adding their voices to the sing-along. "We Are the Champions" never sounded quite like that!

As David put it, "I'm not going to ask for anymore because we got it all!"

Arrangements for the trip were made with the help of the German National Tourist Office.

What's your fantasy adventure?
Tell us and if you can be in one of the cities Dave is visiting across the country Fridays through Oct. 27, you could be whisked away on an "All-Access" weekend, too. On Friday, Sept. 22, join Dave in Miami.

The multiple choice question on Tuesday, Sept. 19 was:

What did Dave and Dave wear to Oktoberfest?
A. Kilts
B. Dirndl
C. Lederhosen
D. Kimono