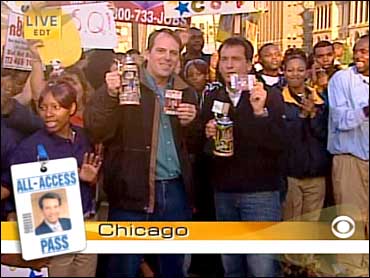 David Curtis of Shelby Township, Mich. wrote to The Early Show saying he loves beer and he loves travel.

So, who better to accompany Dave Price on a visit to Oktoberfest in Munich, Germany this weekend?

David is the lucky recipient of an Early Show "All-Access Pass" to the city, one of eight whirlwind weekend getaways being given away by the show.

Dave announced it in Chicago on Friday.

The two will head to Munich and back on a Lufthansa jet, and see the sites at the biggest fair in the world, thanks to the German Tourist Board.

On Tuesday, Dave will tell viewers all about their adventure. Tune in then!

On the show Friday, "The Alpiners" played in the background as Dave told David of his good fortune. The group will take part in Oktoberfest activities in Chicago later this month.

Dave and David toasted each other with beer mugs Dave brought out, and David was whopping it up, saying how excited he was to be going.

What's your fantasy adventure?
Tell us and, if you can be in one of the cities Dave is visiting across the country Fridays through Oct. 27, you could be whisked away on an "All-Access" weekend, too.