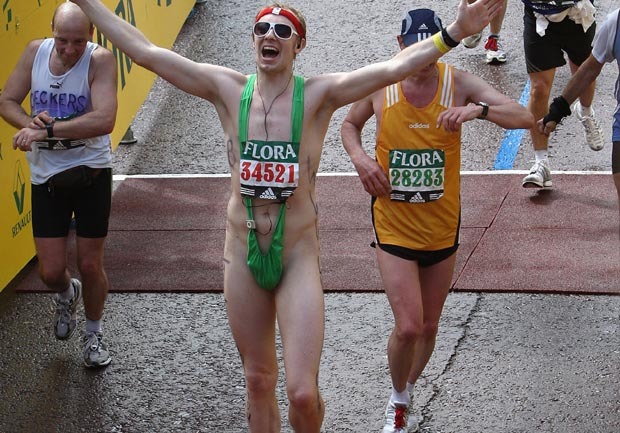 (CBS News) Olympian Russell Mark should probably stick to shooting targets and not wagering on sports.

The Australian shooter, who won gold at the 1996 Atlanta Games, has pledged to wear a lime-green "mankini" at the opening ceremony of the London Olympics after losing an ill-advised Aussie Rules football bet.

According to Reuters, Mark vowed to wear the skimpy swimsuit made famous by the raunchy movie character "Borat" if Melbourne-based Carlton somehow lost to underdogs St. Kilda in the Australian Football League.

Asked on Tuesday if he had indeed made the promise, the veteran athlete told a local radio station: "I actually did make that statement. I still can't believe they [St. Kilda] did it. Anyway a lot of people might think that a mankini might look better than the uniform they've nominated for us so I'm not sure it's such a bad thing."

He may have a point. The uniform designated for Team Australia looks more like a jacket worn by a stodgy country club president than an Olympic athlete.

Making matters worse is Mark's senior status. Because this will be his sixth Olympics, the 48-year-old is a contender to be Australia's flag bearer.

Summed up an Australian Olympic Committee spokesman: "Imagine the flag bearer out in front of our team in a mankini. And a big, butch shooter at that."