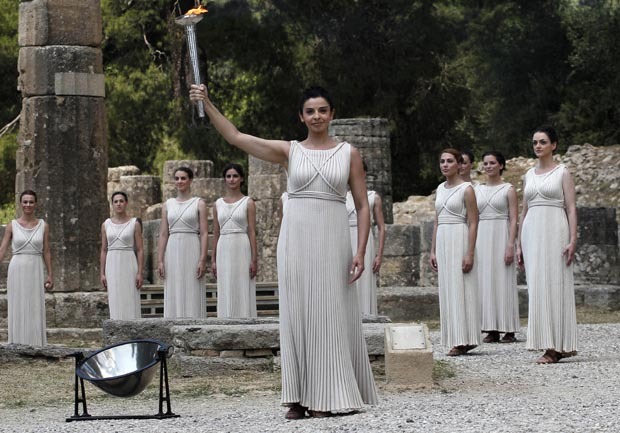 (AP) ANCIENT OLYMPIA, Greece - The flame that will burn during the London Games was lit at the birthplace of the ancient Olympics on Thursday, heralding the start of a torch relay that will culminate with the opening ceremony on July 27.

Actress Ino Menegaki, dressed as a high priestess, stood before the 2,600-year-old Temple of Hera, and after an invocation to Apollo, the ancient Greeks' Sun God, used a mirror to focus the sun's rays and light a torch.

The triangular torch is designed to highlight the fact that London is hosting the Olympics for the third time. It also staged the games in 1908 and 1948.

Under bright sunny skies there was no need for the backup flame that was used during the final rehearsal for the Olympic torch lighting a day earlier.

After the choreographed ceremony, the priestess handed the flame to the first torchbearer, Greek swimmer and Olympic silver medalist Spyros Gianniotis.

The 32-year-old Gianniotis, the Liverpool-born son of a Greek father and a British mother, was the first of 490 torchbearers who will carry the flame across 1,800 miles of Greek soil before the flame is handed to London organizers on May 17 in Athens.

Gianniotis then handed over the torch to 19-year-old Alex Loukos, born of a Greek father and British mother and raised in the east London borough of Newham next to the Olympic Park.

"It is an unbelievable honor to be a torchbearer ... especially carrying the flame in Olympia and representing the city of London," Loukos said. "I have grown up with London 2012 — from helping with the bid in Singapore when I was 12, to witnessing the incredible regeneration of my home in East London."

The final torchbearers for the Greek relay will be two veteran athletes: Greek weightlifter and three-time Olympic gold medalist Pyrros Dimas — who was elected a Socialist member of Parliament on Sunday — and former Chinese gymnastics champion Li Ning.

From Greece, the flame will travel to Britain for a 70-day torch relay covering another 8,000 miles across the United Kingdom. In contrast to the two previous Summer Games, where the Olympic flame relay went around the globe, it will leave the U.K. only once to pass though Ireland on June 6.

The relay will end at the Olympic Stadium during the opening ceremony with the lighting of the cauldron. The games will run through Aug. 12.

It's the second time London officials have come to Ancient Olympia for a flame lighting. London also received the flame before the 1948 Olympics.

"In 1948, shortly after the Second World War, my predecessor stood where I am today and made the first tentative steps in turning the world from war to sport," London organizing committee chief Sebastian Coe said. "We find ourselves in challenging times again and turn to sport once more to connect the world in a global celebration of achievement and inspiration."

"With this ceremony, we begin the final countdown to a dream that came to life seven years ago in Singapore," he said, referring to the city where London beat Paris, Madrid, New York and Moscow to secure the games in 2005. "London is ready to welcome the world for the third time."

This was the final lighting ceremony Rogge will attend as IOC president. He will step down in 2013, at the end of his third four-year term.