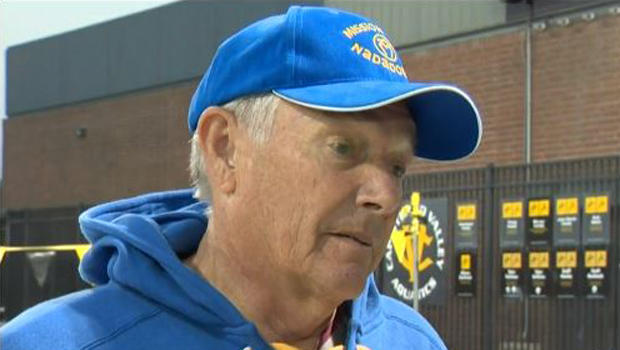 MISSION VIEJO, Calif. -- A Southern California swim coach said he had reported rumors of former Team USA assistant swim coach Sean Hutchison being in a forbidden relationship with a U.S. champion swimmer at an Olympic training center years ago, CBS Los Angeles reports. The revelation about Hutchison comes after the swimmer, Ariana Kukors, said this week that he sexually abused her when she was 16.

Kukors, now 28, also told authorities that Hutchison took thousands of sexually explicit photographs of her when she was a minor, according to a search warrant document by a federal agent.

Kukors told officers that he kissed and touched her when she was 16 and engaged in sexual activity with her when she was 17 at the Pan Pacific Swimming Championships in Victoria, British Columbia, the document said.

Hutchison, 46, denies abusing Kukors and has not been charged with a crime. U.S. authorities and police executed a search warrant at his Seattle apartment this week, seizing electronic devices.

Marc Schubert, who is now the head coach for a Mission Viejo swim club, told CBS Los Angeles that he had heard rumors of a relationship between Kukors, who was then 21, and Hutchison, who was 39, and told his boss to look into it.

"A fellow coach from back East called me and said that there were rumors going around the swim meet about Sean, and I was shocked," Schubert said.

That call came eight years ago, when Schubert was coaching Olympic hopefuls at the Olympic training center in Fullerton. He worked there with Hutchison.

"I felt like I needed to tell somebody," Schubert said. "So I told his boss."

"All they could come up with was Ariana and Sean's cars parked together at 5 a.m. in the morning in front of his condo," Schubert said.

Hutchison and Kukors both denied they were having a sexual relationship, which is against policy for USA Swimming, the U.S. governing body of swimming. Without proof, Schubert said, the head coach did what he thought was best and asked Hutchison to leave.

"I think they came to an agreement that they wouldn't divulge the problem if he resigned," Schubert said.

Hutchison left coaching afterward but remained a member of USA Swimming as the owner of member club King Aquatic near Seattle, the organization said.

Hutchison's bio has been removed from the website. Michael Brooks, the club's head coach, said Thursday that Hutchison has stepped down as an executive with the club and has had no direct interaction with the club's swimmers for a very long time. He said the club supports past and current King Aquatic swimmers.

It's another scandal for USA Swimming and for the sports world, which was rocked by a litany of sexual misconduct by former USA Gymnastics sports doctor Larry Nassar. The organization revealed in 2010 that sex abuse allegations were mostly to blame for lifetime bans of 46 members and then said it set up training and enhanced screening for all coaches, officials and volunteers.

USA Swimming said Thursday that it learned of the underage abuse allegations against Hutchison this week.

Kukors, the 2009 world champion in the 200-meter individual medley who placed fifth in that event in the 2012 Olympics, on Wednesday publicly accused Hutchison of "grooming" her for sexual abuse when she was 13 and he was her coach at a Seattle-area swim club.

"I never thought I would share my story because I was able to leave a horrible monster and build a life I could have never imagined for myself," she said in a statement Wednesday. "But in time, I've realized that stories like my own are too important to go unwritten."

Hutchison, who was an assistant coach on the 2008 U.S. Olympic team, said the two were in a relationship after the 2012 Olympics and that she lived in his Seattle home for more than a year.

"At no time did I ever abuse Ariana Kukors or do anything with her that was not consensual," he said in a statement. "I absolutely deny having any sexual or romantic relationship with her before she was old enough to legally make those decisions for herself. Prior to that time, I did nothing to 'groom' her."

The investigation comes amid scrutiny over the supervision of people who work with young athletes. Nassar was recently sentenced to decades in prison in a case that led to a reckoning for the gymnastics governing body, with top executives resigning and the entire board of directors planning to step down as requested by the U.S. Olympic Committee.

Kukors' attorney in California, Robert Allard, compared his client's case to the one against Nassar.

"Much like the USOC knew about Larry Nassar years before his arrest and did nothing, USA Swimming had notice in 2010 that Sean Hutchison was involved in an inappropriate coach-athlete relationship with Ariana and took no actions to protect her or other swimmers," he said in a statement.

"In retrospect, it was absolutely flawed," he said, adding that a more thorough investigation may have uncovered other problems, including allegations of underage abuse, he said.

"Now with the benefit of hindsight and time, one would have to question whether there was any integrity to the first time they did this investigation," he said, adding that "I sincerely hope that if they're investigating at 21, did they ask what happened before 18?"