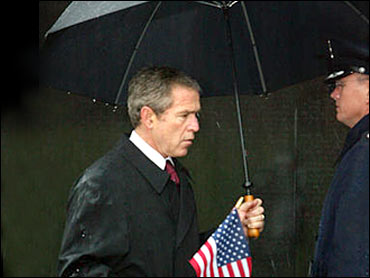 This year on Veterans Day, unlike in some past years, Americans don't need to be reminded what it is to go to war, with soldiers on duty now in Afghanistan and elsewhere, including troops practicing military exercises for possible military action against Iraq.

Honoring those who served in yesterday's wars, President Bush declared Monday that the United States and its allies today face an "urgent task" in confronting Iraq.

"Should military action become necessary for our own security, I will commit the full force and might of the United States military and we will prevail," Mr. Bush said Monday in a White House speech.

Underscoring the threat, senior administration officials said the president has approved tentative Pentagon plans for invading Iraq should a new U.N. arms inspection effort fail. The strategy calls for a land, sea and air force of 200,000 to 250,000 troops, officials said.

Mr. Bush, who began his day with rain-soaked pre-dawn visit to the Vietnam Veterans Memorial, called on new generations of warriors to draw inspiration from those who served — and in many cases, died — before.

"Especially in this time of war, we see in our veterans an example of courage and selfless sacrifice and service that inspires a new generation and will lead this country to victory," he told an East Room assembly upon his return from the early-morning outing to the memorial just blocks from the White House.

"We think first of those who fell and never lived to be called veterans. We remember those whose fate is still undetermined," Mr. Bush said.

The observance comes three days after the U.N. Security Council passed a new resolution, giving Iraq one more chance to disarm, or face "serious consequences." Mr. Bush has made clear those consequences could include a U.S.-led attack.

With the clock ticking on a possible new conflict, many veterans of the Gulf War find old memories coming on strong.

While much is sure to be different this time, some Gulf War cadences could well echo. The worry about gas attacks, for one. The extremes of military life, for another.

The boredom and tension. The camaraderie and loneliness.

After nearly 12 years, Gulf War veteran Max Fuson still can see the blank stares of anxious American troops headed past him into Iraq. David Blade still can smell the oil fires below as he flew into Kuwait. Steve Buyer still can feel the vibrations in his chest from a close-by Scud missile strike in Saudi Arabia.

The desert's unexpected cold and its stifling heat, experienced not just over a change of season but in the course of the day. "We had a running pool, betting on when the temperature would get to 100," says Steve Robertson, activated with an Army National Guard unit from the District of Columbia. "Most days, 9 or 9:15 was a pretty good bet."

Just about any veteran has ready advice for the next generation of soldiers headed for the Gulf. Some of it is practical, some philosophical: take a solar-powered radio so as not to worry about dead batteries; do not count the days because it only makes it harder; document any medical treatment received, even inoculations, in case health problems develop later.

David Feller of Waukesha, Wis., who is helping collect Gulf war stories of 3rd Armored Division veterans, says the prospect of a new war in the region is rekindling interest. "People seem to want to talk about it more," he says.

Scott Satterlee of Decatur, Ill., who served in the Air Force as a bomb loader, arrived in the Gulf in October 1990, but there was not much to do until the bombs started falling three months later.

"We still showed up for work. We just basically sat around the shop for 12 hours," he recalls. "We played a lot of Risk, a lot of Monopoly, believe it or not."

Then came the air war, and on the first night that U.S. aircraft launched from his Saudi base, Satterlee says, "no one went to sleep until they all came back."

Jon Rowland, an Army tank mechanic, wrote in a diary daily during his six months in the Gulf - "even during the firefight, with a red-lens flashlight," he says now. His entries juxtapose the drudgery and horror of war.

On Jan. 15, 1991, as the U.N. deadline for Iraq to withdraw from Kuwait came and went, Rowland wrote, "It's really here and we're ready. The morning brought a glorious sun to dry our swampland. We dug all the water out of our trench. A guy, soldier, fell in a trench and it caved in on him. He died in the hospital. We spent the morning washing our muddy clothes and drying the ones wet in our bags."

Brad Gericke, a young lieutenant in the Army's 3rd Armored Division, reported in his journal for Feb. 24, 1991, the day after the ground war began, "This morning at 0830 we departed for desert war - at the tail of a driving rainstorm." Without elaboration, he took note of radio intercepts indicating that an Iraqi division had requested authority to release chemical weapons.

On March 1, several days after crossing into Iraq and with Kuwait now liberated, he wrote: "The sense of unreality surrounding this whole experience has only heightened. I feel like I'm watching a newsreel unwind frame by frame."

Through it all, troops never strayed far from their gas masks and protective suits because no one knew what Saddam Hussein might unleash.

Day-to-day life in the Gulf varied with the pace of the war, Feller remembers, but the extremes were a constant: "A great deal of monotony and boredom punctuated by occasional extreme bursts of excitement."

For Lt. Col. Sari Berman, then a communications officer for the Patriot program, that meant being "scudded" in three countries - Saudi Arabia, Israel and Bahrain. Berman, now based at Fort Lewis, Wash., was close enough on each occasion to see the incoming missiles, but says, "at the time, you really don't have an opportunity to think you're scared. ... You're just worrying about performing your mission."

The high point of her Gulf service came when Israeli townspeople approached a military gate in Haifa to deliver baked goods, shake the Americans' hands and say thank you.

Most unforgettable for Chris Grey, who spent seven months in the Gulf as a Marine staff sergeant, was riding a Humvee into Kuwait City amid sporadic gunfire during the city's liberation.

"A little Kuwaiti girl gave me a flag," he says. "I have that in my room at home to this day."

For every such golden memory, there is a painful one.

For Berman, it was when a Scud got through and hit a Saudi barracks, killing 28 American soldiers and injuring 48. "It just made you want to work that much harder," she says.

For Steve Buyer, who was in a solo law practice in Indiana when he was activated for Gulf service, it was the death of fellow reservist Lorraine Moyer Lawton, killed in a military vehicle accident.

"The last time I saw her in Dhahran, I gave her a big hug, and said, "Everything's going to be fine, I'm going to see you in Indiana,"' said Buyer. He came home from the war to run for the U.S. House, where he is now a five-term Republican congressman.