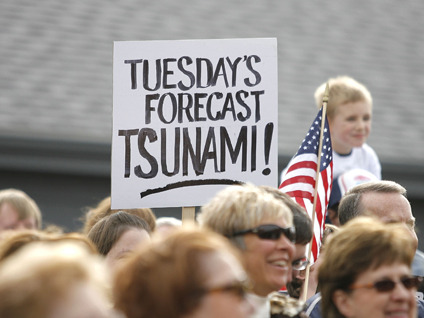 On the eve of Election Day, a fresh batch of polls are crystallizing predictions that House Republicans will cruise to victory on Tuesday night, due to stronger GOP turnout. The enthusiasm gap may not be enough, however, for the GOP to overtake the Senate.

A new USA Today/Gallup poll all but guarantees that Republicans will win the House. The latest generic ballot survey shows likely voters prefer a Republican candidate over a Democratic candidate, 55 percent to 40 percent. The 15-point gap is "unprecedented in Gallup polling and could result in the largest Republican margin in House voting in several generations," according to Gallup. The pollster's model predicts Republicans will take anywhere from 60 House seats or more.

But on the Senate side, the nonpartisan Cook Political Report is taking its prediction for Republican gains down a notch, anticipating the GOP to net six to eight seats -- two short of the number needed to win the majority.

"While it is becoming increasingly likely that Republicans will hold all 18 of its own seats, Democrats' prospects in three of their 19 seats have improved in recent days," according to the Cook Report. "Sens. Barbara Boxer in California and Patty Murray in Washington now appear to be headed for re-election, albeit by small margins. In the special election in West Virginia, Democratic Gov. Joe Manchin now holds an advantage."

CBS News' election analysis shows that the GOP would need to win just six of 28 toss-up races to take back the House.

A slew of new polls from Public Policy Polling, a Democratic-leaning firm that conducts automated calls, for the most part supports that analysis. A number of key races will come down to the smallest of margins, according to PPP. Republican candidates hold slight leads in Washington, Illinois and Pennsylvania, while Democrats have the edge in West Virginia and California.

In Illinois, Republican candidate Mark Kirk leads Democrat Alexi Giannoulias 46 percent to 42 percent for President Obama's old Senate seat, according to PPP. Kirk is pulling ahead with more support from independent voters, as well as a significantly higher turnout expected from Republicans. Giannoulias is also hurt by a third party candidate.

Even though Manchin is a popular governor, he has had a hard time escaping affiliation with President Obama and the Democratic party. Manchin over the weekend was calling former Alaska Gov. Sarah Palin his friend, even as Palin traveled to the state to campaign for Raese. Manchin, meanwhile, will get some support on the campaign trail from former President Bill Clinton today.

The Senate race in Washington, meanwhile, has put Democratic incumbent Patty Murray neck-and-neck with Republican Dino Rossi. The Republican leads by just two points, 50 percent to 48 percent in the new PPP poll. The race may come down to independent voters, who prefer Rossi, 54 percent to 42 percent, according to PPP.

Colorado also remains a close race. Republican Ken Buck leads Democratic Sen. Michael Bennet by just 49 percent to 48 percent, according to PPP. With other recent polls also giving Buck a slim lead, both Democrats and Republicans are preparing for a possible recount.

In the race for Virginia's fifth district -- seen as something of a bellwether district for how well Democrats can maintain support from Obama voters -- Democratic incumbent Tom Perriello continues to trail Republican challenger Robert Hurt in a survey from the GOP pollster Glen Bolger.

If Republicans are able to pull off a huge upset tomorrow, one race they could take would be Rhode Island's first district, where Democratic Rep. Patrick Kennedy is retiring. RNC Chairman Michael Steele predicted this morning that Republican John Loughlin will beat Democrat David Cicilline.