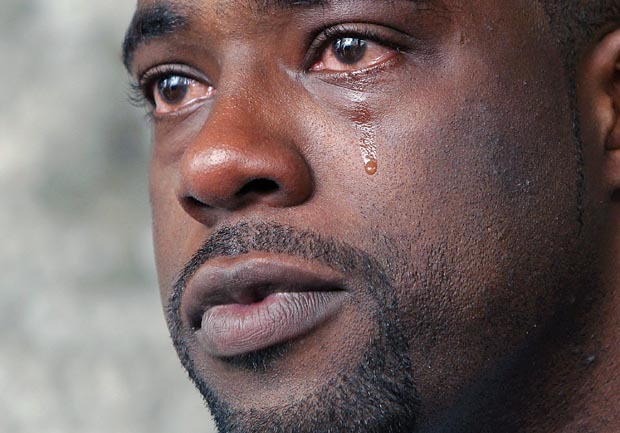 (CBS/AP) LONG BEACH, Calif. - A former high school football star whose dreams of a pro career were shattered by a rape conviction burst into tears Thursday as a judge threw out the charge that sent him to prison for more than five years.

Brian Banks, now 26, had pleaded no contest 10 years ago on the advice of his lawyer after a childhood friend falsely accused him of attacking her on their high school campus.

The district attorney offered Banks a deal -- plead guilty to rape and spend another 18 months in prison, or go to trial and face 41 years to life, CBS Los Angeles reports.

Banks said his defense attorney told him, "'When you go into that courtroom the jury is going to see a big black teenager and you're automatically going to be assumed guilty.' Those are her exact words."

In a strange turn of events, the woman, Wanetta Gibson, friended him on Facebook when he got out of prison.

In an initial meeting with him, she said she had lied; there had been no kidnap and no rape and she offered to help him clear his record, court records state.

But she refused to repeat the story to prosecutors because she feared she would have to return a $1.5 million payment from a civil suit brought by her mother against Long Beach schools.

During a second meeting that was secretly videotaped, she told Banks, "'I will go through with helping you but it's like at the same time all that money they gave us, I mean gave me, I don't want to have to pay it back,"' according to a defense investigator who was at the meeting.

It was uncertain Thursday whether Gibson will have to return the money.

Prosecutors also said they didn't immediately know if she might be prosecuted for making the false accusation when she was 15.

Gibson did not attend the hearing on Thursday.

Banks, once a star middle linebacker at Long Beach Polytechnic High School, had attracted the interest of such college football powerhouses as the University of Southern California, Ohio State University and the University of Michigan, according to the website Rivals.com, which tracks the recruiting of high school football and basketball players.

Banks said he had verbally agreed to attend USC on a four-year scholarship when he was arrested.

He still hopes to play professional football and has been working out regularly. His attorney Justin Brooks appealed to NFL teams to give him a chance.

Banks said outside court Thursday that he had lost all hope of proving his innocence until Gibson contacted him.

"It's been a struggle. But I'm unbroken and I'm still here today," the tall, muscular Banks said, tears flowing down his face.

He recalled being shocked and speechless on the day Gibson reached out to him after he had been released from prison, having served five years and two months.

"I thought maybe it wasn't real," he said. "How could she be contacting me?"

He said he knew that if he became angry when he met with her it wouldn't help, so he struggled to keep calm.

"I stopped what I was doing and got down on my knees and prayed to God to help me play my cards right," he said.

Banks had tried to win release while he was in prison, but Brooks, a law professor and head of the California Innocence Project at California Western School of Law in San Diego, said he could not have been exonerated without the woman coming forward and recanting her story.

Brooks said it was the first case he had ever taken in which the defendant had already served his time and had been free for a number of years.

Banks remained on probation, however, and was still wearing his electronic monitoring bracelet at Thursday's hearing. His lawyer said the first thing the two planned to do was report to probation officials and have it removed.

"The charges are dismissed now," Brooks said. "It's as if it didn't happen. ... It was the shortest, greatest proceeding I've ever been part of."

Banks had been arrested after Gibson said he met her in a school hallway and urged her to come into an elevator with him. The two had been friends since middle school and were in the habit of making out in a school stairwell, according to court papers.

A kidnapping enhancement was added to the case because of the allegation Banks had taken her to the stairwell. That enhancement also was thrown out Thursday.

Outside court, Banks donned a sweat shirt that read "Innocent," as several friends and family members wept. His parents were jubilant, and Banks thanked them for standing by him.

"I know the trauma, the stress that I've been through, but I can't imagine what it's like to have your child torn from you," he said. "I don't know what I would have done without my parents."