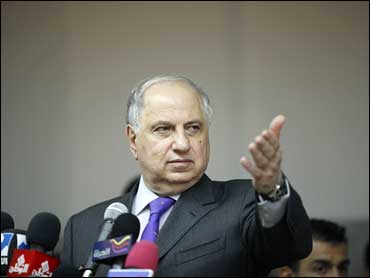 Ahmad Chalabi - a one-time Pentagon favorite whose faulty intelligence about weapons of mass destruction helped pave the way for the Iraq war - was a secular politician groomed by his U.S. backers to replace Saddam Hussein.

After falling out with the Americans, the MIT graduate has reinvented himself - again. He is now a top candidate in an alliance led by an Iranian-backed Shiite religious party.

Chalabi, 65, has bolstered his Shiite credentials with a push against former Saddam loyalists from the helm of a committee that banned nearly 500 candidates linked to the ousted Baath Party from running in the March 7 election.

The move has angered Iraq's Sunni Arab minority and jeopardized U.S. efforts to promote the parliamentary vote as a chance to reconcile the rival Islamic sects following years of violence.

For Women Veterans, Battles Go On at Home

"The Iraqi people have ousted Saddam but the Baath Party is now trying to barge into the political arena again despite the clauses in the constitution that ban the party," Chalabi said as he addressed a crowd of about 200 tribal leaders and other Shiites Sunday at a campaign rally in northern Baghdad.

It's testimony to his ability to adapt and to the influence of religion on post-Saddam Iraqi politics despite a backlash against sectarian parties in provincial elections held last year. Chalabi has joined forces with anti-American cleric Muqtada al-Sadr's movement and the Supreme Islamic Iraqi Council, or SIIC, in a coalition called the Iraqi National Alliance.

That raises the possibility that he could emerge as a compromise candidate for prime minister if the alliance wins the largest number of seats in the new 325-member legislature. He would be an unlikely choice, but the Sadrists might choose Chalabi since he's more able to secure the support of other groups to join a coalition government.

Long known as an elitist who is out of touch with Iraqis after spending decades in exile, Chalabi also has been trying to garner more support by appealing to the ordinary man, often singling out al-Sadr's supporters, mainly impoverished Shiites who comprise the bulk of the population in Baghdad and southern Iraq.

As part of his latest political orientation, Chalabi has been making regular public appearances at major Shiite religious occasions, donning mourning black, for example, at ceremonies dedicated to the seventh century martyrdom of Imam Hussein, one of Shiism's most revered saints when participants weep and beat their chests to show their sorrow.

"Pray for (Islam's Prophet) Muhammad and the family of Muhammad," was how Chalabi began Sunday's address, using a phrase that's more often used by Shiite clerics than a U.S.-educated politician in a dark business suit and a purple tie. The crowd liked it and recited a prayer out loud.

He also was at total ease laying out campaign promises that ranged from jobs, cheap housing, better education, fighting corruption and a transparent government.

Of the wide range of topics he quickly touched on, he dwelt the longest on reinstating in government jobs Iraqis fired during Saddam's rule for their political convictions or sectarian affiliation. It's another favorite with Shiite voters.

"He is an old fox," Kazim al-Muqdadai, a political analyst who lectures political science at Baghdad University, said of Chalabi. "He is only thinking of his personal glory."

Chalabi has drifted far from where he was on the eve of the 2003 U.S.-led invasion of Iraq.

At the time, his Pentagon backers saw him as a possible replacement for Saddam. Intelligence he provided on Saddam's weapons of mass destruction gave the Bush administration reason to invade Iraq. He was a guest at Bush's State of the Union address in 2004. When no WMDs were found, relations soured quickly.

The Americans picked a rival Shiite, Ayad Allawi, for the prime minister's job when they formally ended their occupation of Iraq in June 2004. It was during that year too that the Americans accused Chalabi of passing to Iran U.S. military secrets.

Later, the many years he stayed outside Iraq - he left in the 1950s and lived mostly in the United States and Britain - began to hinder his political career since he had no genuine popular support. That meant a humiliating defeat in the first post-Saddam election for a full-term parliament in December 2005.