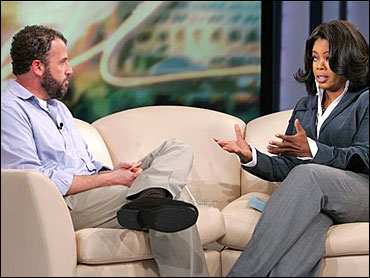 Oprah Winfrey's decision to withdraw her support of author James Frey was in part triggered by an op-ed article published in the Washington Post.

In the column, Richard Cohen said Oprah was "deluded" for continuing to defend Frey's memoir "A Million Little Pieces," even after significant inaccuracies had been exposed.

When Oprah summoned Frey back to her broadcast for a public rebuke, she also invited Cohen.

He talked with
The Early Show co-anchor Julie Chen about the mood on the set when Oprah came out swinging.

"It was very intense," Cohen said. "She came out, obviously, loaded for bear. She was going to make the statement that she had made a mistake and she was wrong and get back her integrity.

"She succeeded. I thought it was a courageous and smart thing to do."

Oprah's seal of approval turned Frey's book into a best seller but, for the first time, the queen of talk had to admit making a bad selection

"I feel duped," she said on her broadcast. "But more importantly, I feel that you betrayed millions of readers."

Sitting in the glare of the spotlight, Frey admitted to lying about details like the length of time he spent in jail, which turned out to be a matter of hours, rather than the 87 days he said in his book.

It was a Jan. 8 story on The Smoking Gun Web site that revealed "glaring inaccuracies in Frey's memoir,
according to a report
by CBS News correspondent Randall Pinkston. The site indicated Frey had embellished — and even invented — some of the material in his memoir.

At first, Oprah defended Frey, even calling in to the Larry King Show with a very public show of support.

"The underlying message of redemption in James Frey's memoir still resonates with me and I know it resonates with millions of other people who have read this book," she said on the air.

"I regret that phone call," she said on her broadcast. "I made a mistake and I left the impression that the truth does not matter. And I am deeply sorry about that because that is not what I believe."

Watching Frey on that Thursday broadcast, Cohen said he wasn't quite sure what to make of the writer.

Cohen said the scandal, in part, might be the fault of the publishing industry.

Asked by Chen whether rules in the publishing industry need to be changed, Cohen said no.

"The rules have always been understood," he said. "There's such a thing as fact and there is such as thing as fiction. They have to apply them and they have to be honest and rigid about it."