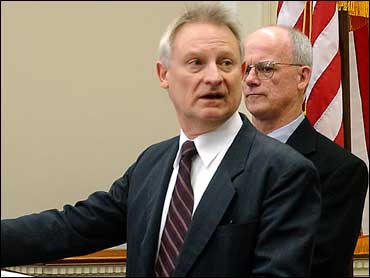 After a protracted vote-counting process in the Oregon governor race, Chris Dudley - the former pro basketball player who was ahead in the tally for most of the count - has conceded to former two-term governor Democrat John Kitzhaber.

In a victory speech today, Kitzhaber said he hoped that Oregonians would move past an attitude of "bitter partisanship" and that they could all "stop letting ourselves be defined by maps on television that show states painted red and blue."

Oregon newspaper The Oregonian called the race for Kitzhaber last night as the results came in for Multnomah County, a Democratic stronghold that contains the liberal city Portland and its surrounding areas, which are some of the densest in the state. Both Portland and Eugene, another liberal bastion, were reporting ballot counts well after the rest of the state, according to the Oregonian.

According to current figures from the Associated Press, Kitzhaber now leads Dudley by more than 12,500 votes.

In an interview with Oregon's KATU on Wednesday, Dudley said he had called Kitzhaber to concede, and wished him all the best as governor. "It's been a real honor and a privilege going through this process," Dudley said to Oregon's KATU. "The hardest part right now, is the thousands of people who poured their hearts and souls into this,'' said Dudley, who declined to say whether he would consider another run for elected office."

The Oregonian reports that Kitzhaber scheduled a news conference for Thursday morning in Portland, but his campaign said last night it did not want to make an announcement until all the votes were counted. As of Wednesday night, Kitzhaber spokeswoman Jillian Schoene said the team remained "cautiously optimistic," according to the AP.

Kitzhaber will be serving his third term as governor in the state: He also served two consecutive terms from 1995-2003. The state's two-term limit, however, specifies that the terms served must be consecutive in order to follow under the limit. Democrat Ted Kulongoski has been Oregon's mayor since 2003.

Kitzhaber's narrow win keeps the Oregon governorship under Democratic control, which it has maintained since 1986.