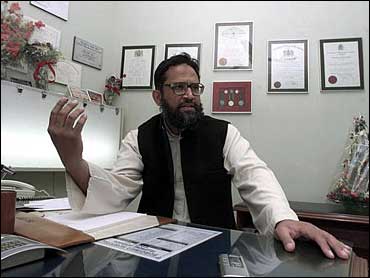 A Pakistani doctor said Wednesday he saw Osama bin Laden a year ago and the al Qaeda leader was in good shape at the time.

"When I saw him last he was in excellent health," Dr. Amer Aziz told The Associated Press. "He was walking. He was healthy."

Aziz was recently released after being held for one month and questioned by U.S. security officials said.

Aziz, a British-trained orthopedic surgeon, said he was summoned to a meeting in November 2001 in Kabul, the Afghan capital. He was asked to treat top al Qaeda leader Mohammed Atef. Bin Laden and his deputy, Ayman al-Zawahiri, were present. Atef, an Egyptian and the al Qaeda military chief, was killed shortly afterward in a U.S. airstrike.

Aziz said bin Laden showed no signs of the kidney failure that he is widely reported to suffer from.

Aziz said it was the second time he met bin Laden. The first time was in 1999 when Aziz said he treated the al Qaeda leader after he hurt his back falling off a horse in southern Afghanistan. Bin Laden was in good health at both meetings, he said.

Aziz was recently released without official explanation after being held incommunicado and interrogated for a month by FBI and CIA agents. He spoke to the AP at his clinic in the eastern Pakistani city of Lahore.

He admitted that he had treated al Qaeda and Taliban members but said he knew nothing of the terrorist group's plans and rejected allegations he helped the organization in its efforts to obtain weapons of mass destruction.

Reports of bin Laden's poor health, and his deteriorating appearance in video tapes released shortly after U.S. bombing began in Afghanistan at the end of 2001, fueled speculation that he might have died. But intelligence officials now say an audiotape released last month was recorded recently and was the voice of the al Qaeda leader.

At the time of the last meeting with bin Laden, Aziz was working in a surgical unit at the University of Jalalabad, near the border with Pakistan.

Aziz said his American interrogators grilled him on bin Laden's health, asked him for the names of those he treated, and accused him of helping al Qaeda obtain weapons of mass destruction. He denied the allegations.