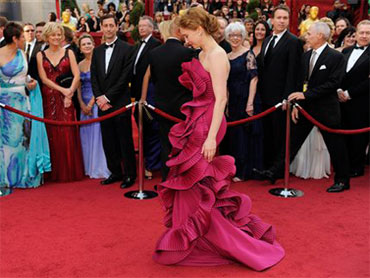 Oscar night is for stars to shine. But did your favorite actors and actresses dress the part?

Photos: Oscar Red Carpet
A List of Oscar Winners
What You Didn't See on TV

Photos: Scenes From the Ceremony

Verdi said few people had a fashion miss this year. But among those that did was Zoe Saldana.

Verdi said, "Zoe's dress was fabulous, but a little over-the-top. It looked like my Aunt Connie made that."

"Early Show" co-anchor Maggie Rodriguez agreed, saying, "The top was nice, but as you go down, you see all those ruffles."

"It's very advanced fashion," Verdi said. "I think it's hard to make that dress come across as something that women want to wear."

She said, "It's all about moving fashion toward. I thought she sparkled, I thought she looked different. You might not understand it right now, but this is something that you'll be seeing all over the country."

Schwartz said, for her, Kate Winslet's gray gown was a miss this year.

"I thought she looked stunning and beautiful, but when you can borrow any dress on the planet, this one is very simple. I kind of looked to her to see more glamorous," she said.

Verdi, who liked Winslet's look, said the dress seemed to have a 1940s feel, a nod fashion great Joan Crawford.

Schwartz countered, "Her hair and makeup was stunning and the dress is beautiful, but I would like to see it at a wedding, not on the red carpet."

Verdi said he loved Jennifer Lopez's dress "even though it looked like it was made of bubble wrap."

He said, "I love that it had this new feeling. I love that it felt very modern and it was sculptural, and it wasn't just about the drape, which is where a lot of fashion lives."

Looking at a photo of Lopez's gown from the back, Verdi added, "I think they pay her butt separately when she signs a deal for a movie."

Among the men, Verdi said Tom Ford was a standout.

Rodriguez said, "And every guy was wearing Tom Ford."

Schwartz added, "And if they weren't, they should have been."

"He's like the Oprah of the red carpet in men's wear," Verdi said. "Everybody wants a piece of Tom Ford."

Ford wore a black tux with a white flower in the lapel.

Verdi said, "He's super cool, and of course, he'll get this right."

Robert Downey Jr. was also a favorite for Schwartz. His midnight blue tux, paired with sneakers was "something different," she said.

Downey's wife, Rodriguez pointed out, had gold accents in her dress, following the evening's prominent trend of metallic flourishes.

Best Actress winner Sandra Bullock also sported gold. However, both Schwartz and Rodriguez said they didn't like the top because it looked like an ice skating costume.

"And I loved that," Schwartz said.

Sarah Jessica Parker's dress was also a conversation piece. Schwartz loved the whole dress for its fashion-forward qualities. Verdi said it looked like a sheet she just stepped out of bed in.

However, Verdi said he was into the back of the gown.

"The back is spectacular," he said.