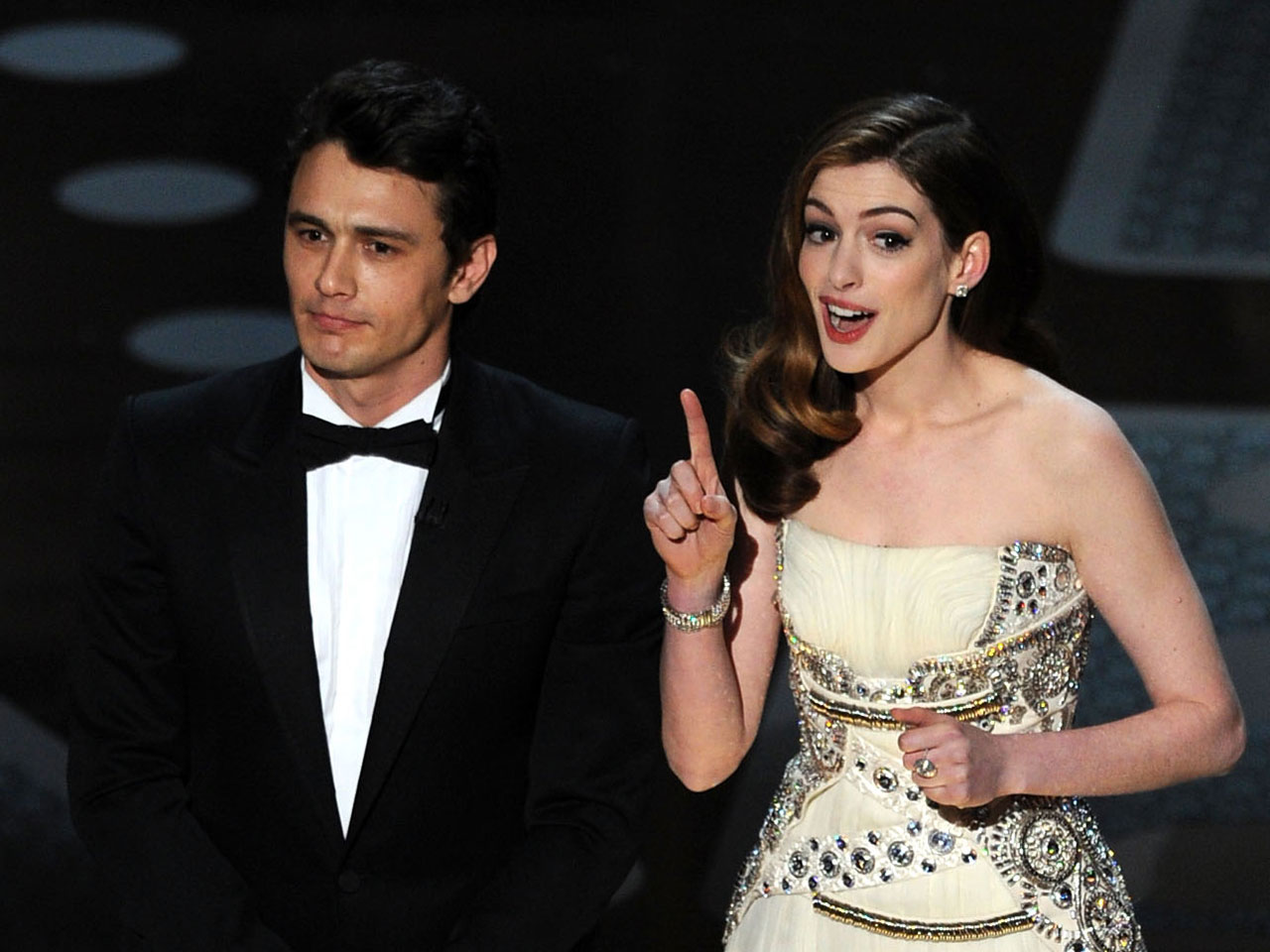 (CBS) 11:42 p.m. Anne Hathaway, wearing yet another dress (Is this five? We've lost count) introduces Steven Spielberg, who is here to give us what we've all been waiting for - the best picture winner.

James Franco and Anne Hathaway say goodbye, and as the P.S. 22 chorus sings "Somewhere Over the Rainbow," tonight's ceremony comes to a close. Hope you enjoyed following along with us!

What did you think of the ceremony? Did you score well on your Oscar ballot? Tell us in the comments.

Scroll down to see the rest of our updates from tonight.

11:30 p.m. Sandra Bullock flirts with the best actor nominees as she announces each one, and gets laughs from the audience as she does it.

The award, as expected, goes to Colin Firth for "The King's Speech."

"I have a feeling my career has just peaked," he says, before warning that he may start dancing before he makes it off the stage. He doesn't, but that's something we would have loved to see.

11:20 p.m. Jeff Bridges comes out to present the award for best actress, calling out each nominee individually to compliment their performances. But only one gets to win, and the Oscar goes to Natalie Portman for "Black Swan."

She thanked the other nominees, director Darren Aronofsky, and gave a sweet shoutout to fiance Benjamin Millepied, who choreographed the film and has "now given me the most important role of my life." (She's currently expecting her first child with him. You can take a look at her red carpet pregnancy style here.)

11:05 p.m. Hilary Swank introduces last year's best director Oscar-winner, Kathryn Bigelow, who was the first woman to ever win the award. Bigelow introduces this year's contenders, and the two hand the trophy to Tom Hooper for "The King's Speech.

Annette Bening then takes the stage to mention the Governors Awards, which took place last November, and introduces the honorees, who get a standing ovation from the audience.

Halle Berry then pays tribute to Lena Horne, and a clip of the late actress singing "Stormy Weather" is played.

The award goes to Randy Newman for "We Belong Together" from "Toy Story 3."

Robert Downey Jr. and Jude Law get some laughs with their banter, then present the Oscars for visual effects, which goes to "Inception," and film editing, which goes to "The Social Network." Downey also tells the audience that Law needs a ride to the Oscar after-party. Any takers?

10:25 p.m. There's a taped bit where some of the year's films were turned into movie musicals, complete with silly auto-tuned songs, and then we're brought back to the Anne Hathaway costume change tally - four! This time she's in a gold, fringed number.

She and Franco then introduce Oprah Winfrey, who gives the award for best documentary to "Inside Job."

10:18 p.m. Amy Adams and Jake Gyllenhaal come out to present the best short films, and Gyllenhaal notes that if you want to win your Oscar pool then you should see these films. Best documentary short goes to "Strangers No More" and best live-action short goes to "God of Love."

Before that, Kevin Spacey introduced the best original song category. Two of the nominees performed - Randy Newman got behind the piano for "We Belong Together" from "Toy Story 3," and Mandy Moore (whose blue gown looks much better than what she walked down the red carpet in) and Zachary Levi sang "I See the Light" from "Tangled." The award itself won't get handed out until the rest of the nominees - Gwyneth Paltrow included - perform later in the ceremony.

10:02 p.m. James Franco introduces the next presenter as the only actress to successfully play Queen Elizabeth I, Katharine Hepburn and Bob Dylan - Cate Blanchett. She hands out the awards for best makeup, which goes to "The Wolfman," and costume design, which goes to "Alice in Wonderland."

9:50 p.m. Scarlett Johansson and Matthew McConaughey hand out the sound achievement awards (sound mixing and sound editing), which both go to "Inception."

9:45 p.m. Anne Hathaway changes her outfit again! This is her third costume change since the ceremony started. Now she's wearing a black and gray number that looks like it wouldn't have been out of place in "Black Swan."

She introduces presenters Hugh Jackman and Nicole Kidman, who give out the award for best original score, which goes to Trent Reznor and Atticus Ross for "The Social Network."

"Is this really happening?" the Nine Inch Nails frontman said, clutching his Oscar. "Being up here is flattering beyond belief."

9:36 p.m. Reese Witherspoon comes out next to hand out the award for best supporting actor, which goes to Christian Bale for "The Fighter."

The actor thanks director David O. Russell, his costars and Dicky Eklund, who is there in the audience. "I can't wait to hear the next chapter in this story," Bale said, telling everyone to go train with the man he played in the film, before getting a little choked up when acknowledging his wife.

9:29 p.m. Anne Hathaway, now in a tuxedo, tells the audience that there's a long history of singing at the Academy Awards. She did it two years ago with Hugh Jackman, and was supposed to do it again this year, she explains, but laments that her partner (cough, Jackman, cough) bailed on her. She then goes into a rendition of "On My Own" from Les Mis, not calling him out by name but making not-so-subtle jabs at Australians and retractable claws. Seems to go over well with the audience.

But that's nothing compared to Franco in drag, channeling Marilyn Monroe in "Gentlemen Prefer Blondes." But we only get to see it for a second before Helen Mirren and Russell Brand come out to hand out the award for best foreign language film. It goes to "In a Better World," from Denmark.

9:23 p.m. The stage turns into the Roosevelt Hotel, where the first Academy Awards ceremony took place. Josh Brolin and Javier Bardem come out in white tuxedos to hand out the screenwriting awards.

Adapted screenplay is given out first, and the award goes to Aaron Sorkin for "The Social Network."

Original screenplay goes to David Siedler for "The King's Speech." It's the first Oscar of the night for the film (it's nominated for 12 overall). He dedicated the award to all the stutterers around the world.

Short goes to "The Lost Thing," and the feature award goes to "Toy Story 3."

9:02 p.m. Kirk Douglas comes onstage next, looking dapper with his cane. He tells James Franco he looks much better when he's not in a cave and hits on Anne Hathaway, asking her, "Where were you when I was making pictures?"

He's giving out the award for best supporting actress. And the Oscar goes to...Melissa Leo for "The Fighter." She touches hands with fellow nominee and costar Amy Adams before heading onstage to accept. "Can you pinch me?" she asks Douglas. He obliges.

8:47 p.m. And we're off! Anne Hathaway and James Franco kicked off their hosting duties with a pretaped bit, inserting themselves into this year's best picture nominees (and Alec Baldwin's dreams), "Inception"-style. Hathaway assures everyone in "The King's Speech" that microphones get smaller and punches Franco in "The Fighter." Then, they get in the "Back to the Future" DeLorean and the pair walk onstage, kicking off the live part of the show.

Hathaway jokingly laments her lack of nomination for "Love and Other Drugs - "used to be, you got naked, you get nominated!" - and Franco's adorable grandmother gushes from the audience that she saw Marky Mark.

Tom Hanks hands out the first two awards - "Alice in Wonderland" wins for art direction, and "Inception" takes home the Oscar for cinematography.

7:59 p.m. Happy Oscar night, everyone! Celebrity Circuit will be live-blogging the Academy Awards tonight - so keep checking back here during the telecast for all the photos and updates on the winners.

If you haven't done it yet, you can print out an Oscar ballot here.

And you can see all the fashion hits and misses in our red carpet gallery.

Hope you're as excited for the Oscars as we are! Keep checking back here all night for updates and head to our special Academy Awards section for complete coverage.