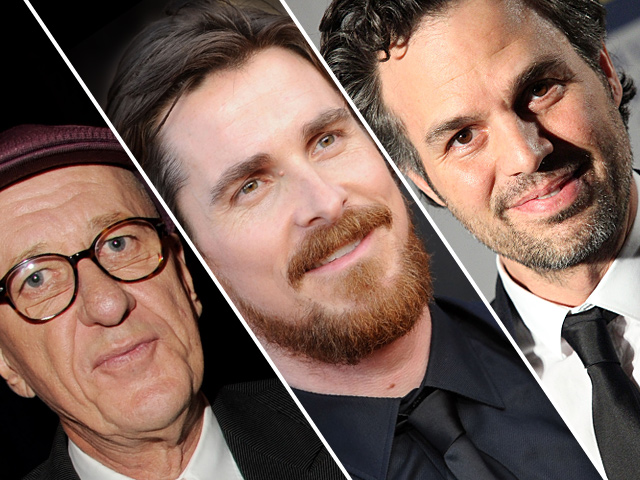 (CBS) Real-life roles pepper this year's Best Supporting Actor nominees - one an unconventional Australian speech therapist, and the other a pro boxer whose life has sunk into drugs and crime.

The actors who played those parts - Geoffrey Rush in "The King's Speech" and Christian Bale in "The Fighter" - will face off against Mark Ruffalo ("The Kids Are All Right"), Jeremy Renner ("The Town") and John Hawkes ("Winter's Bone") at Sunday night's Academy Awards.

Here's a breakdown of the nominees and our prediction for the winner:

Christian Bale in "The Fighter." Bale comes out swinging with his portrayal of real-life boxer-turned-addict Dicky Eklund. The one-time professional boxer, who at his peak knocked down Sugar Ray Leonard, has since fallen hard. He's now addicted to crack and is an unreliable trainer for his half-brother, boxer Micky Ward. Eklund lives in a drugged-out haze, choosing to highlight his past as the "Pride of Lowell" rather than face his struggles, a problem that eventually lands him in jail just as Ward's career takes off.

This is Bale's first Oscar nomination.

John Hawkes in "Winter's Bone." Hawkes takes on the role of Teardrop Dolly, a menacing drug addict living in the Ozarks. Teardrop is violent, threatening and unwilling to help his niece, Ree, when she comes looking for her drug-dealer father. He tells her that her father is probably dead and repeats what everyone else says - that she should stop poking around in other people's business. But when Ree's inquiries get her in trouble, it's Teardrop who comes to her rescue.

This is Hawkes' first Oscar nomination.

Jeremy Renner in "The Town." Renner plays James "Jem" Coughlin, a loose-cannon criminal from Boston's rough Charlestown neighborhood. Jem and his three friends make their living committing robberies, but his antics get the group in trouble during their heists - he takes a hostage during one job, and in another,  leads police on a car chase through Boston that nearly leads to their capture. As an FBI agent and the cops draw closer, Jem is willing to do anything to prevent going to jail.

This is Renner's second Oscar nomination.

Mark Ruffalo in "The Kids Are All Right." Ruffalo plays Paul, a bohemian restaurant owner who loves women and bachelorhood. When two teens he fathered as a sperm donor enter his life, he embraces them - and their lesbian parents - wholeheartedly. But things become complicated when he sparks up an affair with one of their mothers while simultaneously trying to navigate his role as the biological father in this unconventional family. Paul finds he wants to be a part of Joni and Laser's lives, but that doesn't mean there's a place for him there.

This is Ruffalo's first Oscar nomination.

Geoffrey Rush in "The King's Speech." Rush takes on the role of Lionel Logue, the Australian speech therapist who helps Britain's King George VI overcome his crippling stammer. A failed Shakespearean actor with no formal training, Logue's techniques and therapy style are unconventional. Logue doesn't treat the king (whom he addresses by his nickname "Bertie") like royalty. Rather, he removes all pretenses and forces Bertie to face his stammer, his family problems and his destiny - rallying the British people as the country heads into war with Hitler.

This is Rush's fourth Oscar nomination. He won in 1996 for "Shine."

Our Pick: Christian Bale. Bale has had a lock on the honor since awards season began - he's already picked up the Golden Globe and the SAG award in the same category. It would be a huge upset if someone else takes home the Oscar.

Do you agree with our prediction? Vote in the poll below, tell us your favorite performance in the comments and be sure to come back here on Feb. 27 to see who won.