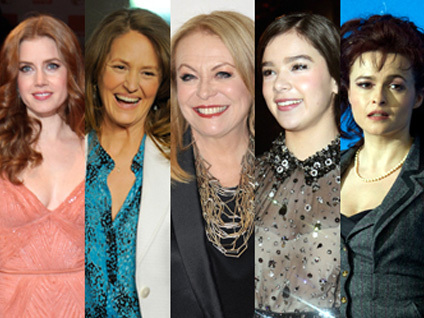 (CBS) Three mothers - one a queen, one a crime family matriarch and the third a brash boxing manager - are among the roles that could win one actress an Oscar for her supporting role.

Those three women - Helena Bonham Carter ("The King's Speech), Jacki Weaver ("Animal Kingdom") and Melissa Leo ("The Fighter") - will face competition from a young but fearless frontier girl (Hailee Steinfeld in "True Grit") and a feisty bartender (Amy Adams in "The Fighter") at the Academy Awards on Sunday.

Here's a breakdown of the nominees and our prediction for the winner:

Amy Adams in "The Fighter." As the bartender-turned-girlfriend of boxer Micky Ward, Charlene stands up to her man's overbearing mother, drug-addicted brother and loud-mouthed sisters - even getting into a physical altercation with them - as she protects Ward's best interests. But she's not just throwing punches: Charlene remains a loving and supportive companion for Ward, encouraging his career and helping towards his comeback.

This is Adams' third Oscar nomination.

Hailee Steinfeld in "True Grit." Steinfeld played Mattie Ross, a frontier girl with unwavering dedication to finding the man who killed her father. Just 14 years old, she employs a U.S. Marshal to track down the culprit and demands to come along for the trip, which leads them into uncharted Indian territory and confrontations with some dangerous characters. She is fearless, fast-talking and resourceful - and won't let anyone get in her way.

This is Steinfeld's film debut, and her first Oscar nomination.

Helena Bonham Carter in "The King's Speech." Carter took on the role of a real-life royal in this British monarchy drama - Elizabeth, the Queen Mother. As the wife of King George VI, who must overcome a crippling stammer to effectively lead his subjects in the face of World War II, Carter's queen remains quietly but unquestioningly loving and supportive of her husband. Carter's queen is simultaneously regal and relatable. She loves her husband and wants him to succeed, and is willing to do anything to help him.

This is Carter's second Oscar nomination.

Jacki Weaver in "Animal Kingdom." This Australian actress made waves with her performance as the matriarch of a Melbourne crime family. Janine "Smurf" Cody keeps a tight watch on her brood -she is ruthless, conniving and has what seems to be a borderline-incestuous relationship with her three criminal sons, and will do whatever it takes to keep her family together.

This is Weaver's first Oscar nomination.

Melissa Leo in "The Fighter." With a blonde beehive and a Boston accent, Leo transformed herself into Alice Ward, the brash and overbearing manager of her two boxer sons. Leo brings the real-life woman to the big screen, playing her as a tough matriarch distrustful of those outside her family and driven to make her boys boxing champions.

This is Leo's second Oscar nomination.

Our Pick: Melissa Leo. She's taken home almost all of the Supporting Actress awards leading up to the Oscars. It would be a big upset if she doesn't get the golden statuette.

Do you agree with our prediction? Vote in the poll below and tell us your favorite performance in the comments.