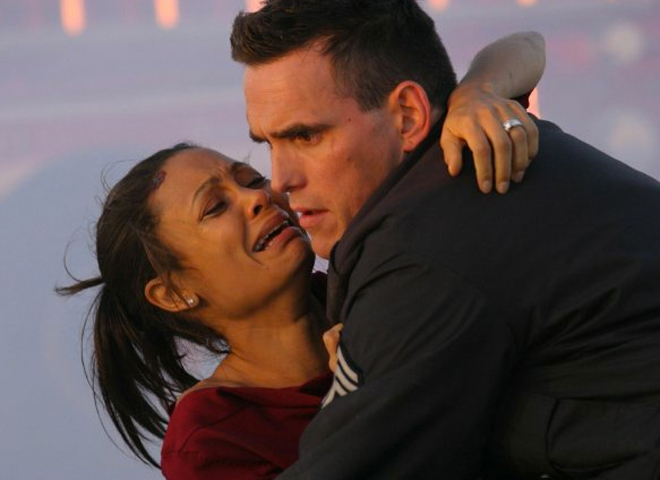 This particular search for Oscar wrongdoing ends with what may be the most egregious Oscar oversight - "Rocky" winning Best Picture of 1976 - and starts with the 2009 winners. (The year at the top of each section refers to the year the films were released, not the year the awards were held.)

The only criterion (except for 1989)  is one picture from among  the nominees must be better than the film that won the Best Picture award.

Tell us what you think. There's room for debate and disagreement with this list, which is totally subjective. Also: Take the poll and let us know what you think is the most undeserving Best Picture winner.

"The Hurt Locker" wins. Should have been "District 9." If we're going to go ahead and nominate super-violent science fiction films alongside super-violent war films, why not go all-out? And why not award Best Picture to an anti-racism and anti-apartheid film masking itself as sci-fi?

"The Hurt Locker" is good. But that moment in "District 9" when Wikus van de Merwe (Sharlto Copley) tells the "prawn" Christoher Johnson that the new city the prawns are being relocated to is more like a concentration camp than a town? Kleenex time.

It's kind of trite that as Wikus becomes less human he becomes more human (he's changing into a prawn as the result of an accident), but sometimes trite works.

"Crash" wins. "Brokeback Mountain" or "Good Night, and Good Luck." would have been better choices; they're better movies.

"Crash" has a lot of defenders. And it's not bad, it's just trite. Yes, trite sometimes works. Just not in "Crash." Racist cop saves the black woman he terrorizes? Bright-eyed cop who bristles at racist cop's racism shoots black kid? Didn't see that coming!

Speaking of seeing things coming, anyone who knows history knows how "Good Night, and Good Luck." turns out.

And if you don't know that part of history, it doesn't matter. The movie makes you forget that Joseph McCarthy was a fraud. It fools you into thinking that the news team trying to produce some muckraking work may go down in flames in the end.

As for "Brokeback Mountain," it's pretty simple. Two people in love driven apart by forces beyond their control? Heartbreaking. And the performances are absurdly believable.

"Lost in Translation," featuring a dramatic-ish Bill Murray, is the better pick. Scarlett Johansson isn't always a convincing actor but she rises to the occasion opposite Bill Murray.

Plus, this movie came out when Bill Murray in a dramatic role was unusual (the wretched "The Royal Tennenbaums" notwithstanding), and he's perfect as a man at a strange place in his life and career.

But: on viewing "Lost in Translation" a couple weeks ago it seemed slower and sillier that it did in 2003. Maybe in the future there will be a different choice.

Watching "American Beauty" all these years later, it's difficult to see what was so appealing about it. Kevin Spacey gives a standard Kevin Spacey performance (the sarcasm-laden guy), the kids are all drips and the Chris Cooper revelation seems non-revelatory.

Maybe that's hindsight. But "The Insider" holds up. It's tense, it's got a classic David vs. Goliath feel (even if David has "60 Minutes" on his side, sort of) and it's one of the last times Haley Eisenberg had a role in a big production.

"Saving Private Ryan" has its flaws. Ryan is kind of a jerk and the opening and closing scenes in the present are tedious. But its virtues - namely, everything else - outweigh those flaws. Plus, it's nice to see Vin Diesel play a non-action hero.

"Fargo" has all the hallmarks of the Coen brothers: Good story, oddball characters, crisp direction, cruel violence. It also has an audience surrogate at its center, police chief Marge Gunderson, which makes this film seem a little more human than some of their others. It's far superior to "The English Patient."

The little pig saving the farm in "Babe," the postman talking with Pablo Neruda in "Il Postino" and any of the sisters in "Sense and Sensibility" are more dramatic, more human and more believable than anything in Mel Gibson's "Braveheart."

It seems as if  there isn't an honest moment in "Forrest Gump," from its baby boomer-baiting to its computer graphics to the idea that life is like a box of chocolates. The dishonesty at the center of "Quiz Show" and the complicated relationship between the two leads in "Four Weddings and a Funeral" rings truer than "Gump." Not even Tom Hanks can save it.

Sometimes the colossal failure that is "Gandhi" is striking. How is it possible to take such a rich human story, a complicated social history and the boot heel of oppression and make it seem like a cakewalk? This movie wants to be a moving tribute but it's a three-plus-hour bore. Ben Kingsley is the only thing that keeps it afloat.

Paul Newman's struggle to find his soul in "The Verdict" is more compelling. Somehow one man's demons seem more potent than the entire British Empire.

Bob Fosse - even flawed Bob Fosse - is always more interesting than divorce and child-rearing. And "Kramer vs. Kramer" is good. But "All That Jazz" is better. And it gets bonus points for giving Roy Scheider a greater part than Sheriff Brody or Buddy Russo.

Like "Good Night, and Good Luck" after it, "All the President's Men" takes a piece of history that the country knows well - in this case, the Watergate break-in - and makes the viewer think, "Wow. These guys may not make it."

"Rocky" never gets to that level. Sure, the fight ends in a draw, but you never thought he was going to lose, did you?