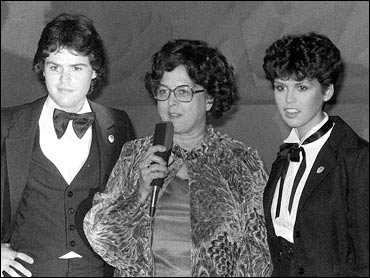 Olive Osmond, the mother of Marie and Donny Osmond and other members of the performing family, died Sunday. She was 79.

Family spokesman Ron Clark said she died of complications from a massive stroke she suffered more than two years ago. Her condition began to deteriorate last week and family members were by her bedside.

"She was surrounded by those who made her life worthwhile and complete," Clark said. "Many of her children were at her side. She couldn't have passed with any greater love and peace than existed in that room."

She was born in 1925 to Thomas and Vera Ann Davis in Samaria, Idaho, where her father was a principal.

She later moved to Ogden, Utah, where she was a secretary at the Adjutant General Depot. There she met George V. Osmond, the soldier she married in 1944.

Both enjoyed music. George sang and Olive played the saxophone, and they passed along their love of music to their children.

Their first two sons, Virl and Tom, developed degenerative hearing losses that affected their speech. The next four sons, Alan, Wayne, Merrill and Jay, had no signs of hearing loss and began singing close four-part harmonies as children. They performed as the Osmond Brothers, producing 34 gold and platinum records in the 1960s and 1970s.

They were later joined by Donny, Marie and Jimmy Osmond.

The family toured internationally and made numerous recordings and TV appearances. From 1976-79, Donny and Marie Osmond hosted the television program "The Donny and Marie Show," which their older brothers helped produce.

Olive Osmond is survived by her husband, nine children, 55 grandchildren and 22 great-grandchildren.