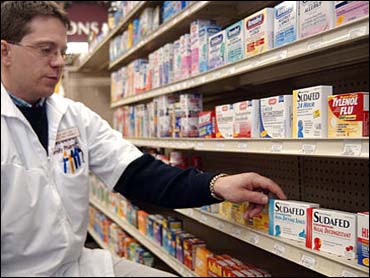 A widely prescribed asthma and allergy drug proved to be no more effective for treating hay fever symptoms than a much cheaper over-the-counter decongestant in a newly reported study.

Hay fever sufferers in the study who took the over-the-counter drug Sudafed 24 Hour (pseudoephedrine) also experienced no more sleep problems or other side effects than people who took the prescription drug Singulair.

That came as a big surprise to the researchers, who expected to see more restlessness and insomnia among the pseudoephedrine users.

"It may be that sleep problems weren't an issue because the people in the study took the once-a-day dose (240 milligrams) of pseudoephedrine in the morning," study co-author Robert M. Naclerio, MD, tells WebMD. "[Hay fever] symptoms also improved, and this was likely to have a positive effect on sleep."

In the head-to-head comparison, Sudafed 24 Hour and Singulair proved equally effective for treating the most common hay fever symptoms, such as sneezing, nasal congestion, runny nose, and nose and throat itchiness.

The University of Chicago study included 30 hay fever sufferers who took 10-milligram doses of montelukast (Singulair) each morning for two weeks and 28 who took the once-a-day, 240-milligram dosage of pseudoephedrine. The study was financed by Singulair manufacturer Merck & Co. Inc. Merck is a WebMD sponsor.

Time-released 240-milligram capsules of pseudoephedrine cost about 80 cents a day on line, compared with nearly $3 for 10 milligrams of Singulair.

"Our hypothesis was that montelukast would have additional benefits and pseudoephedrine would interfere with sleep, but when we compared them head-to-head we found that for the treatment of allergic rhinitis, these drugs were virtually identical," says researcher Fuad M. Baroody, MD.

The over-the-counter pseudoephedrine actually proved to be slightly more effective for reducing nasal congestion than Singulair, the researchers wrote.

The study is published in the February issue of the Archives of Otolaryngology – Head and Neck Surgery.

But neither of the drugs are the most widely recommended treatments for seasonal allergies, says asthma and allergy specialist Philip E. Gallagher, MD.

Gallagher is a private practice allergist in Erie, Pa., and is a spokesman for the American Academy of Allergy, Asthma, and Immunology.

He says the University of Chicago study shows that an over-the-counter drug can work just as well as a prescription medication for many people with seasonal allergies.

"People who have mild, intermittent symptoms don't necessarily need to run to their doctors," he says. "The over-the-counter drugs can be very effective."