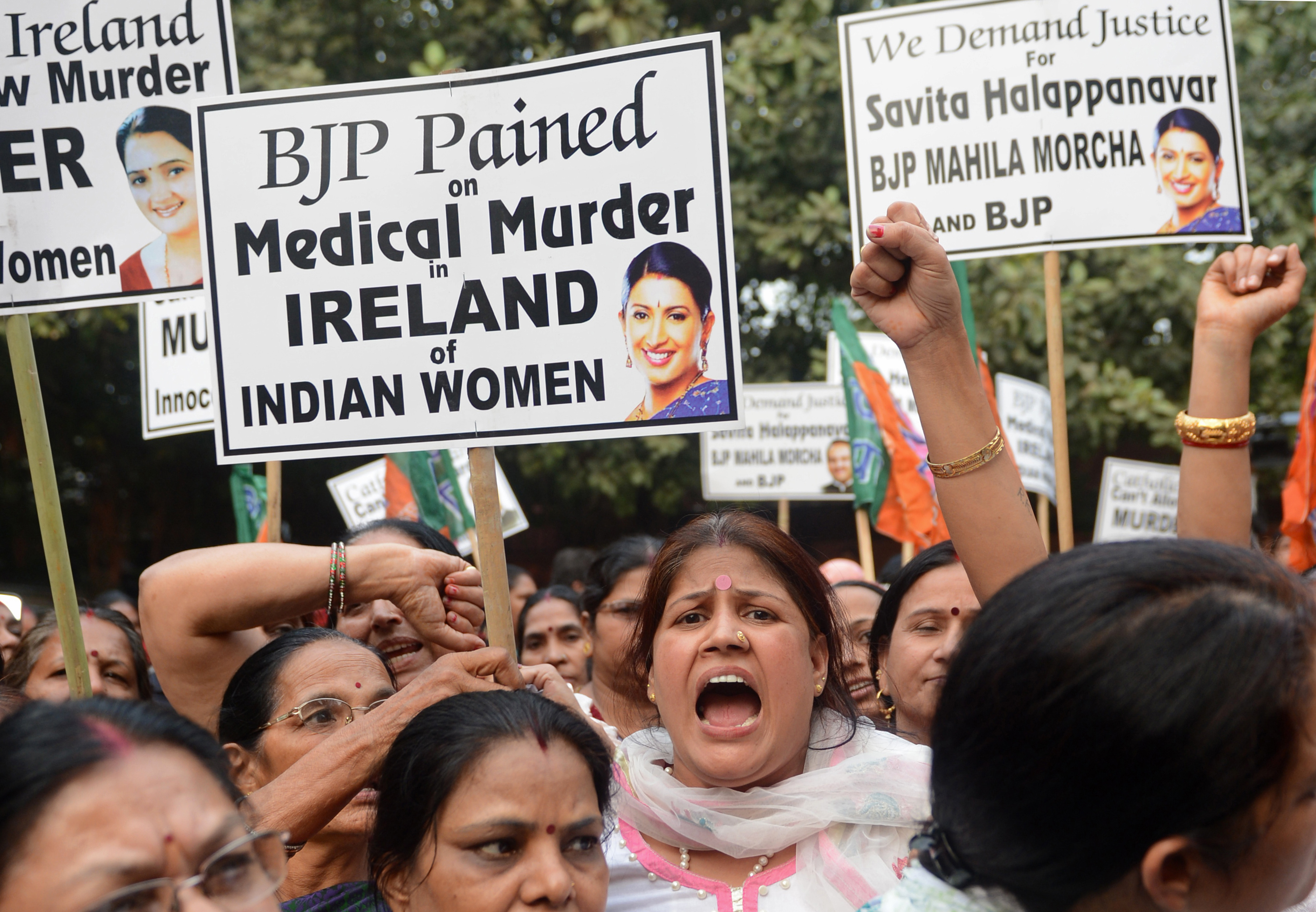 DUBLIN Pressure mounted Thursday for the Irish government to draft a law spelling out when life-saving abortions can be performed - a demand that came after a pregnant woman who was denied an abortion died.

Activists protested Thursday night in Belfast a day after thousands rallied in London, Dublin, Cork and Galway in memory of Savita Halappanavar, a 31-year-old dentist who died a week after doctors said she was starting to miscarry her 17-week-old fetus.

Despite her rising pain, doctors refused her request for an abortion for three days because the fetus had a heartbeat. She died in the hospital from blood poisoning three days after the fetus died and was surgically removed.

Irish gynecologists demanded Thursday that the government close a 20-year-old hole in the country's abortion law that leaves them fearing prosecution if they abort a fetus to protect a woman's life.

"We would like to be able to practice medicine in a safe environment legally. The current situation is like a sword of Damocles hanging over us," Dr. Peter Boylan of the Irish Institute of Obstetricians and Gynecologists said Thursday. "If we do something with a good intention, but it turns out to be illegal, the consequences are extremely serious for medical practitioners."

Halappanavar died Oct. 28 but her husband went public with the situation this week after taking his wife's body back home to India for cremation.

In India, newspaper headlines Thursday accused Ireland of committing a murder. Halappanavar's husband and parents gave a string of interviews expressing incomprehension that Ireland - a country boasting one of the world's lowest maternal mortality rates - could have handled her emergency so poorly.

"In an attempt to save a 4-month-old fetus they killed my 30-year-old daughter. How is that fair, you tell me?" her mother, A. Mahadevi, told Indian television.

Some of Ireland's leading experts on maternal care said they long had feared that a death like Halappanavar's would happen - not because doctors don't want to save the lives of their patients, but because Irish law on abortion makes them fearful of taking action on borderline cases.

In parliament, hours after 2,000 citizens outside the gates held a candlelit vigil demanding reforms in Ireland's prohibitive abortion laws, Deputy Prime Minister Eamon Gilmore said the government would act "to bring legal clarity to this issue as quickly as possible."

That would mean a law, or Health Department regulations, spelling out the precise medical circumstances when a doctor can abort a fetus in a country that officially bans the practice except to save the life of the mother.

Boylan, former chief of one of Dublin's leading maternity hospitals, Holles Street, said this often is a difficult call to make.

While he declined to discuss Halappanavar's case specifically, he noted that cases such as hers, where a woman's cervix is fully dilated for days and the risk of infection grows, represent a potentially life-threatening condition but not a certain one.

" There are very few absolute certainties in medicine," he said. "As you get less probable, that's where we run into difficulties. ... there are circumstances where our hands are tied."

Despite the pressure, few political analysts expect Ireland's government to take swift action to make clear when abortions can take place. For the past two decades, successive governments have refused to pass legislation in line with a landmark 1992 Supreme Court judgment that found women should receive abortions in Ireland if their pregnancy posed a "real and substantial risk" to their life, but not their health.

Abortion remains perhaps the most polarizing issue in Ireland despite the decline of faith in the Catholic Church, battered by a string of child-abuse scandals. Opinion polls show majority support for legalizing abortion, but politicians advocating liberalized access to abortion are confined largely to Gilmore's Labour Party, the smaller member of Ireland's 20-month-old coalition government. Other parties, including Prime Minister Enda Kenny's Fine Gael, are broadly opposed.

"For Irish society, abortion is an intractable issue. For politicians it's untouchable," said Dearbhail McDonald, legal editor of the Irish Independent. "This is the kind of thing that brings down a government. They will not risk it."

She wrote a deeply personal column Thursday in her paper, noting she was the same age - 35 - as the woman at the center of the 1992 Supreme Court ruling. That girl, then 14, had been raped by a neighbor. When her parents went to the police, the government tried to stop her from traveling to England for an abortion. The court ruled that the girl should receive an abortion in Ireland because she was threatening to kill herself if refused.

McDonald said many Irish women identified with the plight of that girl, identified only as X, and with Halappanavar, whose smiling face dominated the front page of every Irish newspaper Thursday.

"It's hard to explain the depth of anger and sorrow Savita's death has ignited in me - a visceral rage that has reduced me, and many of my friends, to tears of exasperation and despair," she wrote. "All of us thinking: That could have been me. All of us thinking: Why haven't we sorted out this mess?"