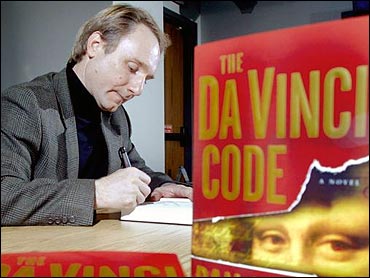 The movie isn't even out yet, and I've already overdosed on "The Da Vinci Code."

I assume there are other commercial enterprises I'm just not aware of. There must be a Da Vinci Code mobile to be hung above baby's crib as well as Da Vinci Code breakfast cereal, guaranteed to be controversial and taste good, too. And would any of us be surprised in the near future if we hear that Broadway is welcoming the Da Vinci Code musical?

Some people feel the book is a wonderful piece of literature, and others feel it is offensive blasphemy. I don't fall into either of these categories.

When I read the book, I didn't understand what all the fuss was about. I considered it to be in that genre of literature that I call "airplane books." You know what I'm talking about. You usually buy them at the airport store, and you read them all the way through on the flight. They are the kind of books that are best read in between destinations, at least 30,000 feet above sea level. They make the trip go faster. You don't care if you spill something on them. You can skip a chapter or two. They are heavy on fast, page-turning plot, and light on character development. They are filled with so many holes in logic that they are best not discussed — or even thought about — after you have landed and grabbed your bag from the overhead bin. I'm not saying "The Da Vinci Code" is a bad book, but a 747 seems a much more appropriate place for it than a library.

I know millions of people disagree with me. That's OK. It's happened before — especially around election time. Declaring a book to be "good" or "bad" is a subjective thing. And I couldn't say anybody is "wrong" for liking the book or even thinking it's a great work of art. It just didn't do it for me. And even if I had given the book the benefit of the doubt, I never would have guessed that it would have spawned a popular jigsaw puzzle.

The other element that has surprised me has been the outrage that many people feel about the book. The pope is not a fan of the book and he's not going to be a cheerleader for the movie. Other religious groups are equally aghast. When I was in Indianapolis, I watched a late-night TV preacher demonstrate point by point how inaccurate the book was. Of course, it's inaccurate — it's fiction!

And that's what I don't get. Don't all of those who feel that it's sacrilegious know it's a novel? It's just a story. A guy made it up. It's pretend. Nobody is saying this is a true story.

When religious people in the Middle East condemn a work of art, a cartoon, or a piece of fiction, we label them irrational extremists. How different has some of the reaction to the fictional Da Vinci Code been?

2And come on, how offensive do they really think a movie from Tom Hanks and Ron Howard is going to be?

If I wrote a humorous story and said that some archaeologists discovered that Moses was actually given tablets with eleven commandments, not ten, and the eleventh commandment was, "Thou shalt always turn off the light when thou leavest a room," I don't think religious leaders would be upset. They'd think it was either stupid or amusing, but not an attack on their religion. So, why has "The Da Vinci Code" — a piece of fiction — touched such a nerve in our culture?

Of course, the author, publisher, and filmmakers are doing nothing to extinguish the controversy. It has only made "The Da Vinci Code" even more popular. I wonder how many more movie tickets will be sold because of the opposition of religious leaders.

I guess it will all blow over after the movie's out for a while. In the meantime, I'm pretty sick of seeing things having to do with "The Da Vinci Code." But I can't deny its power. Somehow, it made me write a discussion of "The Da Vinci Code" in which my main point is that there's too much discussion about it.

Lloyd Garver writes a weekly column for SportsLine.com. He has written for many television shows, ranging from "Sesame Street" to "Family Ties" to "Frasier." He has also read many books, some of them on the ground.