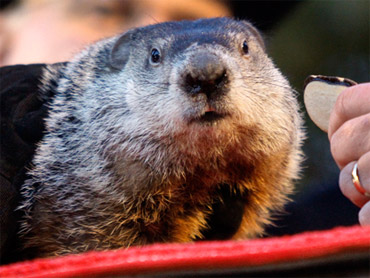 (CBS) HEMPFIELD, Pa. - In a state famous for a groundhog who predicts the weather (aka Punxsutawney Phil), who could predict that a man trying to shoot a groundhog would shoot his friend in the foot instead?

Well, maybe if you knew the alleged shooter was drinking beer and whiskey all day long you could have predicted it.

James Sullivan, who was aiming at a nearby groundhog, told police that the scope was off on his gun and he ended up accidentally shooting his friend in the foot, reported CBS Pittsburgh.

Both friends had spent the day drinking beer and whiskey, according to police.  Sullivan, 51, was sitting on the porch when he saw a groundhog a few feet from his sleeping friend, Barry Guy.

Sullivan allegedly "grabbed a rifle and decided that he was going to try and shoot this groundhog," State Trooper Steve Limani told CBS Pittsburgh.

"And in doing so, shot his friend in the foot."

Guy, 51, was flown to a hospital in Pittsburgh where he underwent surgery. A friend - not Sullivan - told the station that Guy lost a toe in the mishap.

"That's extremely reckless the fact that someone would take a firearm after consuming a large amount of alcohol, point it anywhere near anyone and even think to shoot off a round - luckily in this case only thing that was shot was the victim's foot," Limani told CBS Pittsburgh.

Sullivan is facing aggravated assault and related charges, and was released on $10,000 bond.