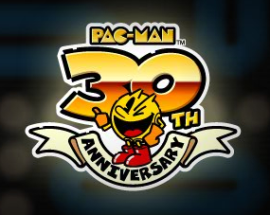 It's probably impossible to count the times someone has written that video games are as big or bigger a business as Hollywood.

But long before the Halos and the Sims and the Call of Dutys and the Maddens began bringing in billions of dollars, the world was dominated by a simple yellow character munching his way through a maze of dots, trying to avoid getting eaten by ghosts.

On May 22, 1980, a Japanese company called Namco Bandai released a game in Japan called Puck-Man. The title was rejected in the United States because some worried that the "P" would chip off the cabinet and look like an "F."

Regardless, a global phenomenon was born that day. And on Saturday, Pac-Man celebrates its 30th anniversary. And unlike so many of the hit games that have come and gone since then, the little yellow disc with the missing pie-slice for a mouth has become a legend in the video games industry, as well as an inspiration for many of the best-known designers in the field.

"I think there's no question that Pac-Man was sort of a watershed event in the popularity and possibilities of video games," said Richard Garriott, a veteran designer known for his pioneering work on Ultima and Ultima Online, as well as his leading roles on Lineage, City of Heroes, and Tabula Rasa. "It was by no means the first [hit game], but earlier offerings [like Asteroids and Pong], no matter how compelling [they were] to nerds like me...Pac-Man was really the first [that reached] what I would call the broad cross-section of society, men and women. It was really the first time, where people looked at video games not merely as this odd thing that teenage boys would [pump] their quarters into, but which had much broader social significance."

That may seem like a bold statement, but there is evidence to back the idea that Pac-Man may be the most influential video game of all time. For instance, the Guinness Book of World Records named Pac-Man as the best-known video game character on Earth, beating out stalwarts like the Mario Brothers and Sonic the Hedgehog. Guinness also lists Pac-Man as the most successful coin-operated game ever.

And while it may not have the attention of the typical male teen gamer, Pac-Man certainly still has a place in society today. There are popular iPhone and iPad versions of the game, many bars still feature the arcade machines. And on Friday, Google is breaking new ground by unveiling its first-ever interactive and playable home page logo, a full-featured, 255-level version of Pac-Man (see this video), built from the ground up but maintaining an almost perfect look and feel of the original.

"We are very excited about the Google [logo] project," Namco CEO Kenji Hisatsune told CNET by e-mail. "This being the first time Google has ever included sound or made a [logo] playable demonstrates just how big of an impact Pac-Man has made."

Marcin Wichary, the Google senior user-experience designer who led the Pac-Man logo project, agreed that the game has made a huge difference in many people's lives, including his.

Pac-Man was released when "there were a lot of space shooters," said Wichary. "It was the first game that tried to approach it a little bit differently. It tries to tell a story and it's not a violent game. It's very friendly, with colorful characters and music. I think that was important...It's just so amazing that Pac-Man's so timeless. Even 30 years later, it's actually [still] such a blast to play it."

One of the biggest reasons that Pac-Man, and its many sequels, especially 1981's Ms. Pac-Man, were hits, is because they were very simple. Pick up one of today's more complicated $60 Xbox 360 titles and if you're not a hard-core gamer, you can easily get so confused and intimidated that you quickly give up. But Pac-Man wasn't like that.

"Pretty much anyone could watch someone playing it for 10 seconds and understand everything about it," said Steve Meretzky, a veteran game designer who created famous Infocom titles like Leather Goddesses of Phobos and the game version of Hitchhiker's Guide to the Galaxy. "It was a game everyone felt comfortable playing, even in the setting of an arcade, and that's why it became so universally popular."

In addition, Meretzky said, Pac-Man had something for everyone, be it a first-timer or someone who had spent countless dollars in quarters on it. "It's just incredibly well-crafted," he said. "It balances pretty well. Even if you are a super expert and you're playing it for the zillionth time, level one isn't boring. It still feels fun to play. And vice-versa. Even if you're a rank newbie, level one doesn't feel like a horrible crushing experience. It's still fun to play."

You can read the rest of this article at CNET News.com.