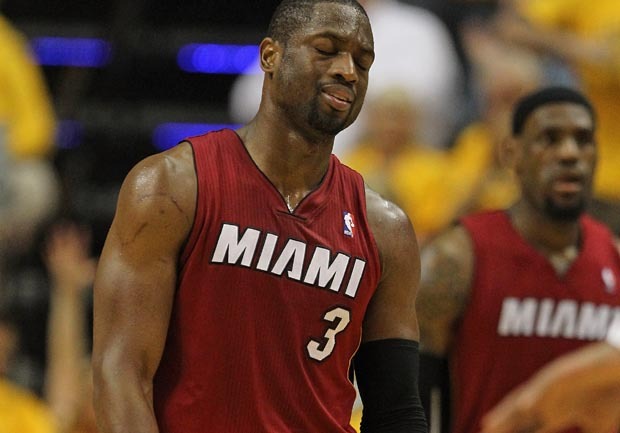 (CBS/AP) INDIANAPOLIS - LeBron James grabbed a seat on Miami's bench, lowered his head and stared down at the floor.

The Heat are in a hole.

Roy Hibbert had 19 points and 18 rebounds, George Hill scored 20 and Danny Granger 17 as the Pacers, showing more balance, toughness and togetherness than favored Miami, throttled the malfunctioning Heat 94-75 on Thursday night in Game 3 of the Eastern Conference semifinals.

Overlooked during the regular season and given little chance to upset the reigning East champions, the Pacers took a 2-1 lead in the best-of-seven series.

James scored 22 — 16 in the first half before wearing down — and Mario Chalmers added 25 for Miami. However, Dwyane Wade, banged up and possibly slowed by a more serious injury, scored only 5 on 2-of-13 shooting for the Heat, already missing forward Chris Bosh because of a strained abdominal muscle and not expected to return for this series.

"It's obvious he wasn't himself." James said of Wade. "Does he want to play better? Of course. He's one of the best players in the world."

Wade didn't play like one and he also had an angry exchange during a timeout in the third quarter with coach Erik Spoelstra, who dismissed it as a heat-of-battle incident. (See incident below):

"That happens," Spoelstra said. "Anybody that has been part of a team or has been a coach or been a player, you have no idea how often things like that happen. That was during a very emotional part of the game. We were getting our butt kicked. Those exchanges happen all the time during the course of an NBA season.

"There's going to be a lot of times where guys say something, you don't like it. You get over it and you move on. We're all connected. Dwyane and I have been together for a long time, a long time. We've been through basically everything. A lot of different roles, a lot of different teams. That really is nothing. That is the least of our concern. That type of fire, shoot, that's good. That's the least of our concerns. Our concern is getting for Sunday."

CBSSports.com's Gregg Doyel says Wade stole the scapegoat spotlight from James by being terrible on and off the court.

"As famous as James is -- as polarizing as he is -- people won't be talking much today about his poor game," Doyel writes. "We'll be talking about Dwyane Wade, and we'll wonder what's wrong with him. Isn't he supposed to be a great player? Didn't he used to be a good guy?"

Indiana outscored Miami 51-32 in the second half, when the Pacers could do no wrong.

SAN ANTONIO - On his 30th birthday, Tony Parker first kept the San Antonio Spurs on pace for what might be another lopsided playoff sweep. Then the All-Star who's always quick to needle Tim Duncan about his age finally acknowledged his own.

Chris Paul, meanwhile, isn't acknowledging anything: Not his aching body that everyone but him is talking about, or the Los Angeles Clippers' season careening toward the end this weekend unless things change fast.

Parker scored 22 points, Duncan had 18 and the Spurs beat the fading Clippers 105-88 on Thursday night, taking a 2-0 lead in their Western Conference semifinals and winning their 16th in a row with yet another playoff blowout.

For the 13th time in a winning streak that seldom run this long in the NBA playoffs, the Spurs won by double digits. Only two other teams have sustained a longer winning streak in the playoffs: the 2004 Spurs (17) and the 2001 Lakers (19).

"I think for us, is to not look at that," Parker said about the streak. "Concentrate on the task. We know Game 3 is going to be very, very hard. I think we should focus on that and not focus on the winning streak, or what we're doing good."

Paul responded to his awful Game 1 with only a slightly better encore, scoring 10 points as the Clippers now head home desperate to steer out of what's starting to get the feel of a sweep.

Game 3 is Saturday in Los Angeles, and Game 4 is Sunday.

When the Clippers land in California early Friday, they'll be home for the first time in nearly a week. They've played seven games in 13 days, and they'll have played nine in 16 by the time the weekend is over.

Clippers coach Vinny Del Negro knows his team needs rest. Blake Griffin scored 20 points but added another injury to the list, this time what he described as a hip flexor strain. He's already battling a sprained left knee and shaking off a turned ankle in Game 1.

He had just one rebound.

"We're not going into these next two games thinking `Oh, let's try to keep it close,"' Griffin said. "There's no moral victories or moral losses here. We're not worried about how many points we lost by."

The All-Star matchup of Paul vs. Parker went from a Game 1 bust to a lopsided mismatch, and appeared to prove Paul is hurting more than he's letting on. Del Negro says his star is still struggling with an aching hip and groin, even as Paul insists he's OK.

He again looked anything but. While Parker — the last of the Big Three to finally hit the big 3-0 — celebrated by more than tripling his seven points and dreadful 1-for-9 shooting in Game 1, Paul shot 4 of 9 and had just five assists.

At halftime, the third-place finisher in the league's MVP voting had more personal fouls (3) than points (2), assists (2) or rebounds (2). He finished with eight turnovers, a career playoff high.

"No excuses, I've just got to play better," Paul said. "But I don't ever recall having that many turnovers.