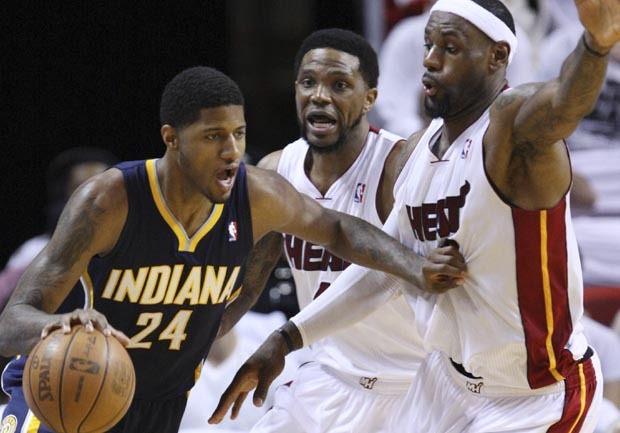 (CBS/AP) MIAMI - This does not sound like a winning formula. Miss 24 of 29 shots in one stretch, on the road. Watch an 11-point, second-half lead turn into a deficit. Have your entire team get outscored by two players in the fourth quarter.

Somehow, it worked for the Indiana Pacers.

And with one part of the Big Three gone, the Miami Heat might have a very big problem.

David West scored 16 points and grabbed 10 rebounds, and the Pacers took home-court advantage away from Miami by beating the Heat 78-75 in Game 2 of the teams' Eastern Conference semifinal series Tuesday night — after LeBron James and Dwyane Wade both came up short on key opportunities in the final minute.

"Defense and rebounding," Indiana coach Frank Vogel said. "We built this team, we started talking about smash-mouth basketball, about winning the war in the trenches, and that's with defense and rebounding. That's what I grew up watching Eastern Conference basketball being like. We understand offense is going to come and go, especially like a great defensive team like these guys ... but we're pretty good, too."

The series is tied at 1-1, with Game 3 in Indianapolis on Thursday night.

James scored 28 points for Miami and Wade finished with 24, though both failed to convert big chances late. James missed two free throws with 54.3 seconds left and Miami down one, and Wade was short on a layup that would have tied the game with 16 seconds remaining. Moments later, a few of the Pacers were leaping in celebration at midcourt of Miami's floor, something that Wade said was noticed afterward.

"The game is not lost or won with two free throws," James said. "But I definitely want to come through for my teammates. So I'll get an opportunity again. I know I'll be at the line again in that situation. Just go up and make `em."

Miami was without Chris Bosh, who's sidelined indefinitely — almost certainly the rest of the series, possibly longer if the Heat advance — after he strained a lower abdominal muscle in Game 1.

After Wade's missed layup that would have tied the game, he remained on the court for a few extra seconds, looking exhausted until James — who said Wade would make that shot "10 out of 10 times" — pulled him up.

"Chris was missed, no doubt about it," Wade said, after he and James outscored Indiana 21-17 in the fourth. "But that's not the reason we lost this ball game."

Still CBSSports.com's Royce Young wonders if the Heat can indeed win the series without Bosh. "Consider this: In the first playoff game of the Big 3 era in Miami, the third highest scorer for the Heat had five points. Five. Bosh has his faults, has his blemishes and has things he could do better, but he would've scored more than five points," Young writes.

SAN ANTONIO - Tim Duncan had 26 points and 10 rebounds and San Antonio, recharged after a weeklong layoff, wore down weary Los Angeles to win Game 1 of their Western Conference semifinals series.

Playing for the sixth time in 11 days, Los Angeles gave San Antonio its toughest first half of the playoffs before fading fast. And unlike their stunning Game 1 comeback at Memphis in the first round, the Clippers didn't have the wind this time.

Manu Ginobili added 22 points for the Spurs, who've won 15 in a row. It's the longest winning streak sustained in the NBA playoffs since the 2004 Spurs won 17 straight.