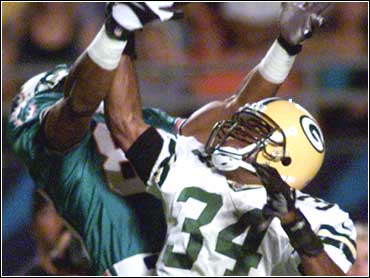 The Miami Dolphins solved one question this preseason: Lamar Smith is their starting tailback.

They will have to wait at least another game to figure out the quarterback situation.

Without stepping on the field, Jay Fiedler might have gained ground on Damon Huard in Miami's quarterback competition.

Huard failed to lead the first-team offense to a touchdown for the third straight preseason game, but the Dolphins scored with 25 seconds to play to beat the injury-riddled Green Bay Packers 17-14 Monday night.

"I'm a little frustrated, but I'm not going to push the panic button," Huard said. "It's preseason. ... We'll be fine. I know it's going to turn around."

"I missed six all last year and three in one game (against Dallas)," Mare said. "Hopefully, I'll miss four this season and all in (this) game."

Dolphins rookie Ben Kelly returned a punt 73 yards less than a minute to play, setting up a 2-yard scoring pass from Mike Quinn to Deon Dyer. The Packers questioned the ruling, arguing that Kelly had stepped out of bounds near midfield.

Replays were as unclear as Miami's quarterback situation.

Huard played three quarters, going 16-of-23 for 138 yards. But without a touchdown in three games, he seemingly left plenty of room for Fiedler to take over the starting job before the season opener.

Fiedler, who had arthroscopic surgery to repair torn cartilage in his right hip on Aug. 3, returned to practice Saturday and should play significantly in Miami's exhibition finale Friday against New Orleans. His performance could be an important showing in the race to replace Dan Marino, the NFL's career passing leader.

The Dolphins with as many questions on offense as the Packers have injuries may have found an answer at running back.

"We felt like Lamar gave us the best chance to run th football," Dolphins coach Dave Wannstedt said. "Obviously, after today that just reinforces our decision. He will be the guy."

Smith could be relied on heavily early this season, especially with J.J. Johnson facing a four-game suspension for violating the NFL's steroid policy.

After missing his first three field goals, Mare gave Miami (2-1) a 3-0 lead in the second quarter with a 34-yarder.

The Packers (1-2), playing without quarterback Brett Favre and running back Dorsey Levens, struggled to move the ball for much of the night.

Favre sat out with lingering tendinitis in his throwing arm but expected to return to practice Wednesday. Levens had arthroscopic surgery on his left knee last week and is expected to be back in 3-4 weeks.

Matt Hasselbeck, subbing for Favre, was 5-of-12 for 72 yards against Miami's first-team defense.

"We'll play these guys again in the regular season and it'll be a whole different ballgame," Hasselbeck said.

Third-teamer Danny Wuerffel had much more success against the Dolphins' backups. The former Florida Gators quarterback and Heisman Trophy winner led the Packers to two fourth-quarter touchdowns, scoring first on an option play and then on a long pass play.

Miami went back in front 10-7 with 8:15 to play on Quinn's 8-yard scoring pass to Oronde Gadsden.

But two plays later, Wuerffel hit Donald Driver on a simple buttonhook route. Cornerback Ray Hill whiffed on the tackle, allowing Driver to sprint down the sideline and into the end zone.

"The games are going to be close," Wannstedt said. "We have to hold onto the ball, control the clock and play defense that's where we are right now. Whether we like it or not."