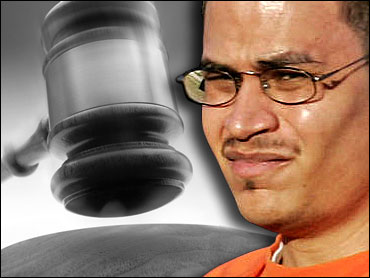 
If you were to evaluate in linear terms the significance of the terror support and conspiracy trial of once-upon-a-time "dirty bomb" suspect Jose Padilla and two confederates you would place the matter well below last year's 9/11 sentencing trial of Zacarias Moussaoui, the once-upon-a-time "20th hijacker." After all, there are no victims here. No dead or wounded. No grieving families. No vigils. No dark plots targeting New York or Los Angeles or the Mall of America. No grand declarations of defiance.

There is instead a trio of men who in the decade or so before the Twin Towers fell spoke and acted passionately, with undeniable gusts up to suspiciously, about Islamic causes. Padilla himself may or may not have attended a terror training camp in Afghanistan in 2000. The other two men may or may not have recruited him into a terror cell. The three may or may not have spoken wistfully and rather vaguely about some sort of Islamic revolution by violent means.

With closing arguments just completed in this controversial trial, jurors now must determine whether any of these acts constitute a crime. If convicted of all three charges, the men each would face the possibility of life in prison thanks to federal conspiracy and "material support" laws, buttressed since 9/11. That's true in a "murder" conspiracy even if, as is the case here, the participants never murdered anyone or even identified a particular person they intended to murder. It's true even if, as is the case here, they talked only generally about killing, maiming or kidnapping "persons in a foreign country" (never mind Americans), to use the language of the statute and the indictment.

But even without death and destruction this trial in many ways is more important than was the Moussaoui trial or any of the other terror-law proceedings that have cropped up since the terror attacks on America. It is the most pointed test so far of the scope to which regular Americans are willing to go in accepting their government's strategy of aggressively criminalizing pre-9/11 conduct that never ultimately devolved into violence; of indicting and trying to convict people after the terror attacks who were apparently not worthy of indictment and conviction up to and including September 10, 2001.

Federal agents, we learned during the course of this case, were spying on these three guys for years and had amassed hundreds of thousands of wiretapped intercepts without ever charging them. And then the feds simply gave up. "The government stopped listening in 2000," one defense attorney told jurors on Monday. "Why? Because they knew that nothing was going on with these people." The case - the crime - was resuscitated only in 2004, three years after 9/11 and two years after Padilla was arrested and held incommunicado as an "enemy combatant" and four years after the surveillance ended.

If Padilla and Company are convicted jurors not only will have vindicated the government's "looking at the past through the lens of the present" strategy. They also will have vindicated the government's decision to tar the men with the stain of al Qaeda as we now know and perceive it. Prosecutors mentioned al Qaeda 90 times in their opening statement and 100 times in their closing argument, defense attorneys noted Tuesday. Why? Not because of a strong link between the men and Osama bin Laden. But "because [al Qaeda] is scary," defense counsel William Swor told jurors. "Because fear runs high," said Padilla's attorney, Michael Caruso.

Defense attorneys say this is a case of "guilt by association" and that the men have been targeted because of their religious beliefs and the exercise of protected free-speech rights. It's the United States versus Islam, one defense attorney said, because the government is going after these fellows mostly because they wanted to establish strong Islamic states around the world. "This is a giant game of six degrees of separation," Caruso told the panel. "It is case about an artificial association based upon a profile."

You rarely hear such raw, racial religious themes in a case - the government wants you to be afraid of "the other," said Padilla's attorney - but it is fully present here. The feds wouldn't dare prosecute fundamental Christians who wanted to live according to the New Testament, the defense told jurors, so why should they be going after Muslims who want to live according to the Koran? Especially when those Muslims evidently weren't looking for trouble in America, anyway, but rather focused upon atrocities in places like Bosnia and Chechnya.

Nonsense, say prosecutors. The men didn't just talk the talk of jihad but acted upon it by training at terror camps and by otherwise doing the very things the world now knows to be the work of terrorists. The feds say the men used coded fighting words - "football" meant "terrorism," "marriage" meant "getting killed," one "eggplant" equaled $1,000, and "zucchinis" were weapons. They were in contact with known terrorists, the feds say, and one of them even received a fax signed by bin Laden back in 1994. That may not have been a crime back then, the feds say, but it is evidence of one now.

All of this proves, prosecutors told the jury, that the men had the requisite "intent" to kill, kidnap and maim people and that they agreed to do so while they were in the United States. All this proves, defense attorneys consistently declared, is that these guys were talking over a decade ago about going overseas to help their Muslim brothers and sisters fight against infidels, real or imagined. And all it means, Padilla's lawyer added, is that the feds are desperately and for political reasons trying to mold into crimes theories that are based upon a shapeless set of unremarkable facts.

That's just one reason why the government is on trial here, too, perhaps to an even greater extent than are the men in the dock.