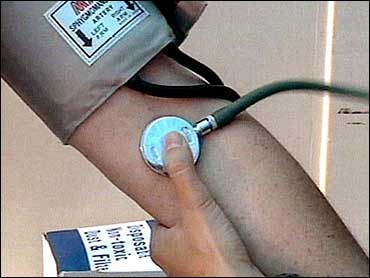 The popular pain relievers ibuprofen and acetaminophen, contained in scores of over-the-counter remedies, may increase the risk of high blood pressure, a study in women suggests.

Skeptics say the link is flimsy and needs confirmation in better-designed studies, and even the Harvard researchers who conducted the study do not recommend that people stop taking the medications. But the authors add that their findings are plausible given what's known about how the drugs affect the body.

The study, in Monday's Archives of Internal Medicine, involved 80,020 women aged 31 to 50 who participated in a nurses' health study and had not been diagnosed with high blood pressure at the outset. They were asked in 1995 about their use of painkillers; information about high blood pressure was obtained from a survey two years later.

During those two years, 1,650 participants developed high blood pressure. Women who reported taking acetaminophen 22 days a month or more were twice as likely to develop hypertension as women who did not use the drug. Those who used nonsteroidal anti-inflammatory medicines that often - mostly ibuprofen - were 86 percent more likely to develop hypertension than nonusers. Aspirin use did not appear to be associated with an increased risk.

Acetaminophen is contained in Tylenol and ibuprofen is in Motrin, two of the most popular over-the-counter painkillers.

While the relative risks sound high, the results suggest that the vast majority of women taking the medications will not develop high blood pressure, said Dr. William J. Elliott, an internal medicine and pharmacology specialist at Rush-Presbyterian-St. Luke's Medical Center in Chicago.

Elliott, who was not involved in the research, also noted that the study lacks information on doses participants used, which would be needed to show a true cause and effect.

The researchers from Harvard's School of Public Health acknowledged that shortcoming and other limitations, including relying on women's own reports about hypertension rather than blood pressure measurements.

Still, the link was seen even when other possible explanations were factored in, including age and body-mass index, said researcher Dr. Gary Curhan.

Dr. Anthony Temple of McNeil Consumer & Specialty Products - makers of Tylenol, Motrin and St. Joseph aspirin - said the study "does not show any cause and effect relationship."

Curhan also said the results probably did not stem from underlying conditions such as rheumatoid arthritis that might increase blood pressure risk. Factoring in that variable also did not change the results, he said.

"Given that these medications are readily available over the counter and are used by a large proportion of the adult population, this association merits further study," the researchers said.